In my previous post (which was Post No. 101 - nobody was more surprised than I! Did I really write all that? Yes, must have been me...) I mentioned that circumstances had prevented me from writing for a while, and that I would tell you more about that in a later post.

Well, this is going to be said "later post".
Last week, I had to go to hospital for an operation. Nothing dramatic; it was a case of taking action before anything dramatic could have developed. Ever since March or April this year, I knew that there was the possibility of me having to have this done, and now the specialist as well as my doctor advised me accordingly, and the appointment was made.


I was in hospital for five days, and I remember what I thought while I was, neatly tucked in, wearing a tent-like hospital nightie and a funny plastic bonnet like a shower cap, waiting on "Death Row" (I know. It is not very tasteful to say that, with people sometimes really not coming out alive after an operation) until it was my turn to be wheeled into the operation theatre. While someone stuck a needle in my hand and I was observing my bed to be moved from fourth in line to third and second, I marvelled at how this very instant, me being surrounded by competent and very clever people who know a great deal about medicine and the human body, was (at that moment in time) the top point of a very long line of medical history, of people who had, millennia ago, discovered that certain plants and other things can help in case of injuries or sickness, and had made it their aim to find out about it as much as they could.


My marvelling went on to try and grasp the enormous steps that were necessary to develop a (mostly) fully functional national health care system, with hospitals, universities where there is a legally binding amount of things to learn and exams to pass for those who want to be physicians, regulations about medication and all sorts of beaurocracy and rules to observe, not to forget the astronomical sums of money involved, and all that from our humble ancestors who merely noticed at some stage that some herbs were better than others for an upset tummy or to still the bleeding from a sabre-tooth wound (I have not researched this, therefore I don't know whether anyone ever really recovered from a sabre-tooth wound, helped along by herbs; it is merely to illustrate my point of how far we have come since the time when our ancestors roamed the savannah.).


What I felt at that moment was gratitude; I was grateful for those people having chosen the job they were doing and which enabled them to take care of me today so that I need not worry anymore about something happening in my body that was not supposed to be happening.


Before, I always thought that, should I ever have to go to hospital for an operation, I'd feel like a helpless victim, like a piece of meat being lugged about by faceless and nameless professionals dealing with everything in a cold and distant manner (maybe I watched too many science fiction films with white-clad mad scientists performing experiments on humans to "save the world" or satisfy some Alien ruler).
Instead, I found I was in good hands, and that impression proved to be true in the hours and days that followed the operation.


Everyone I met during my short stint in hospital was kind and friendly, some showed a sense of humour that I appreciated very much, and although I knew they were very busy, nobody ever gave me the feeling that looking after me or answering my questions was bothersome or "just business".


I was also lucky in that they put me in the same room with a woman my age, who spoke my language (which is by no means to be taken for granted) and who liked to talk when we were both up for a chat, but was also content with being quiet and read or snooze and was not constantly blabbing my ears off or having the telly blaring mindless talk shows, adverts and series at me.


The food was alright; nobody goes to hospital expecting gourmet meals, but it was alright and thanks to my mum's generous contributions of chocolate cake, I never went hungry :-)


Almost all the time during those five days, the weather was beautiful. We had a spectacular view from our room on the 14th floor, facing East, but even that kind of late-summer weather which normally would not have kept me indoors for longer than necessary did not make me want to do anything apart from staying put, reading and talking to my visitors and my roommate - which was good, because I was not allowed to do anything else anyway.


Sunday morning after breakfast (taken on the 14th floor with a sunrise view of my home town with its many green parks and gardens) I was released, leaving with mixed feelings; I had been taken care of so well, and was not in a hurry to go home, while at the same time I was looking forward to having my own bed, my own bathroom and of course my cat there waiting for me.


Since then, I have had time to readjust to a more or less self-determined way of life again, without people coming into the room at all times of night and day, poking you with needles, taking your blood pressure and temperature, examining you, asking questions and telling you where to be when for whatever was lined up for you to happen next.


My mum and my sister had brought flowers to my hospital bed, and of course I took these home with me. There was some more chocolate cake for me, too, and coconut kisses. 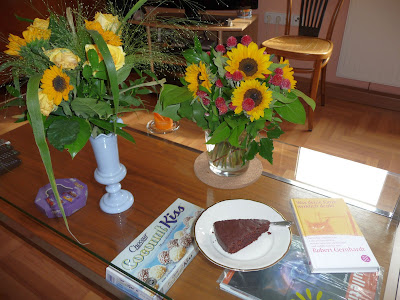 Although I do get up and move about, I am never very far from my bed, and of course I read more than when I am at work. Pukky and I have taken turns - she had to go to the vet's on Monday, because her upper right fang had come loose, and she'd been faffing with it to the point of lodging the broken tooth into her gum, behind the small front teeth. Of course she was in pain and bleeding, so in spite of me not really feeling up to it, I went to the vet's with her (kindly taken there by my dad by car) and they kept her over night so that they could put her under anaesthetics the next day and remove the tooth.


Waiting there at the surgery was quite daunting and made me realize how much in need of rest I still am. The noise level in the waiting area was not much different from what it is like at the office where I work; with the phone ringing a lot and many people talking at the same time, doors opening and closing and people walking back and forth. None of it requested any kind of response from me, and yet I felt overwhelmed and would have liked to shut my eyes and put my hands over my ears and ask people to just be quiet, please (of course I didn't to that. I kept staring straight ahead, hoping we'd be able to leave quickly.).


Now we are both on the mend. I suspect she is already quite close to feeling as good as new, whereas it will take me another week at least until my former energy comes back and I am ready to face the world again. 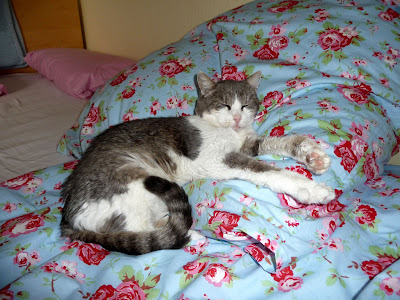 Labels: Daily Life, Inside My Mind