Even More Catching Up: GamesCom 2011

So, it seems I am finally sitting down to start writing about one of the topics I already mentioned here, the GamesCom 2011, which took place in August.
Don't worry - in this post, I do not intend to bore you to death with an endless succession of pictures and details about Europe's biggest computer games show; if you really do want to see all the snaps I took in 2011 and previous years, you can do so here in the photobucket album, and all the official stuff can be found here:
http://www.gamescom-cologne.com/en/gamescom/home/index.php

Maybe not all of you know that one of my favourite pastimes is to play The Sims, namely The Sims 2 and The Sims 3. Like a true Simmer, I started with the first game, and this is how it all came about:
In November 2000, my husband (who back then was not yet my husband) moved from England to Germany to join me here. He was an avid computer games player and had been ever since his teenage years. I, on the other hand, had so far only used my computer to go on the internet, write emails and chat (that was, by the way, how Steve and I had got to know each other: in a Star Trek chat room in September 1999). When we started to live together, he introduced me to computer games - and soon we found out that I didn't like most of the ones he preferred. For some games, it was simply a question of not liking the idea of the game (to this day, I can't see the point of sneaking around corners and shooting monsters; this sort of thing does not give me a thrill), whereas in other games, I saw how limited I was by my lack of hand-eye-coordination. "Midtown Madness" was a game I sometimes played for a few minutes, since in that game, you are expected to race your car through, for instance, a digitalized version of London and deliberately crash into walls, lamp posts and other cars - that IS fun for a few minutes, because you fully well know you can never do that in real life and get away with it (and why should you want to, actually?).
Still, Steve wanted me to have more fun on the computer, and so when in one of the games-related email newsletters he regularly got they talked about "The Sims", a new game, he thought it sounded like something I would enjoy and bought it for me in January 2001.
And the rest, as they say, is history!

At first, it took us both some time to work out the game, but we soon found we both liked it, and it seemed to be made for the likes of me. Everytime a new expansion pack was released (twice a year), he bought it for me. It became "my" game a lot more than his, and in 2002, I signed up at the newly opened online forum on the official website. I liked reading about how others played their game, and often, I was able to help when they had game-related questions or technical issues.
This, unknown to me, did not go unnoticed, and after some time I was approached by someone from the company who produced the game, EA (Electronic Arts). They asked me whether I wanted to become part of the moderating team for the forum, and after I had talked it through with Steve, I accepted.

Well, some time later, EA decided they wanted members from the gaming community to promote the game on the show (back then, it was still called Games Convention) once a year, and I was approached once again. After I had gotten the OK from my boss (I had to take a week off, because the show is always from Wednesday to Sunday, and the Tuesday is needed to get everyone ready and up for their tasks), I accepted, and have worked at the fair ever since.
It is the biggest event for gamers in Europe, and it truly IS big.

Let me show you some pictures:

My working outfit for the whole week. Believe me, it can be quite nice not having to think about what to wear, for a change! But it also feels good getting into one's own clothes again when the job is done and the week is over.

My colleagues - the (mostly) visible part of the team working on EA's booth alone, almost 100 people. Not counted are the technicians and other people working behind the scenes. And that is just one (albeit the biggest) exhibitor at the show. 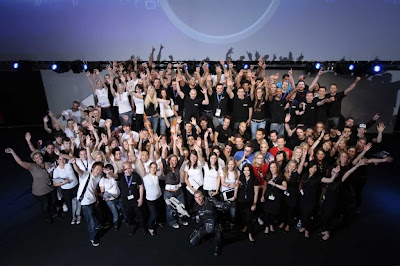 The part of the team responsible for the section of the booth dedicated to The Sims. I am about twice their average age, but that did not stop us from working together really well. 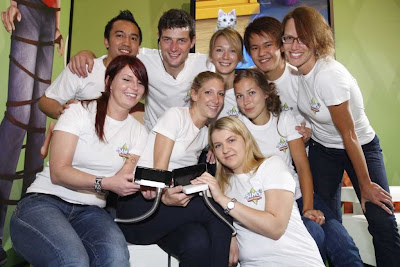 View of the Sims section of the booth, before the fair opened. We had 20 places (consoles and computers) for people to play the game at. 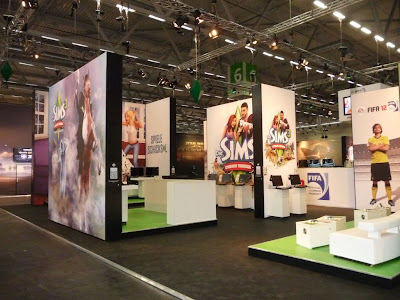 Of course, EA does a lot more than just produce The Sims. The Battlefield series is one of the most popular ones. No visitor was going to get such a good, unobstructed view of the plane - this was just possible if you worked there and were there before the opening. 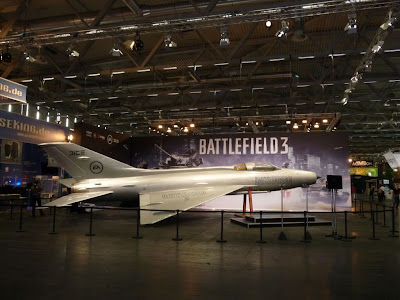 This is what it was like for the visitors. Honestly, if it wasn't for me working there and getting paid, I'd not set a foot in there! Admission is not very high (10 Euro per person I think), but on a beautiful summer's day like we had there, I'd have 1000 ideas how to spend my time, and queuing for 3 hours to be allowed to play a game for 5 minutes (I'm not kidding you, that is what my colleagues had to put through where Battlefield, Mass Effect and Need For Speed were played) is certainly not one of them!
On the Saturday, which is traditionally the busiest day of the show, the gates were closed some time before noon because of safety concerns. Tens of thousands of visitors were turned away. 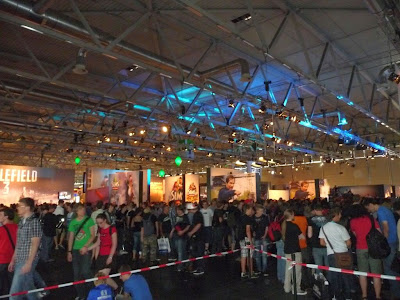 We didn't have quite such long queues, but we could not complain about lack of interest, either :-) 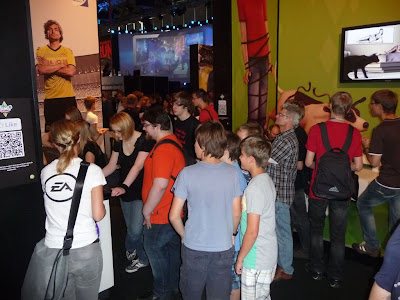 Before the show opened each morning, there were photo opportunities for us, the staff. My colleague here was one of our walking acts (yes, the Star Wars games come from the same company). 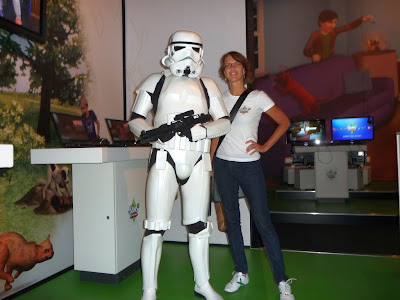 In the evenings, I was usually expected at some event or other, but I couldn't always be bothered and sometimes just went to relax, put my feet up and read in my hotel room. When you've stood on your feet for about 12 hours and have talked (or, rather, shouted - the noise level in the halls is quite high) to hundreds of people, you do not necessarily feel much like partying. But I went to the Community Party, and took this picture on the way there: Cologne's cathedral, seen from across the Rhine, at sunset. 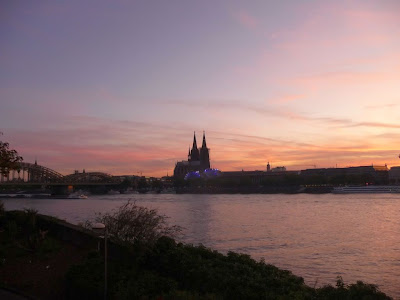 For me, the job ended every evening when the fair closed - for others, it only just began - the cleaners were at work all night to get everything shiny and ready again for the next morning. 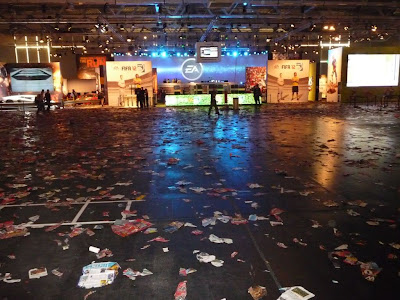 Another year has gone by, and I have no idea how many more GamesComs I will work at. Of course I will eventually either feel too old for that kind of fun myself, or EA simply won't ask me anymore - whichever happens first!
Posted by Librarian at 19:29