In vain I've tried to find the original comment of one of my regular readers (was it you, Kay?) who suggested my Mum do a guest post on my blog; it must have been fairly recent, around the time of my Dad's birthday at the end of January, but I can't find it. Never mind - the idea was great, I suggested it to my Mum, and here it is: her first excursion into blogland, as my guest star!!!

Note: my Mum's English is fluent but she has not quite as much practice as I do; she wrote this in English even though I offered to do the translation from German for her, because she wanted to see for herself that she can do this - and I am sure you'll agree with me that she can! I have changed very little (of course on her request) and am quite proud of her, not just because of her ability to read and write English so well even though she only ever learnt it at school, and that was in the 1950s.

My daughter asked me to write a blog as a guest-blogger. I wondered what subject I should take, and she answered: Anything you have been impressed with, or you are angry about, or a fictional story.
Well, here is what deeply impresses me every year:

I believe in angels - at least a very tiny little bit ;-), though I am not a religious person, but there must somewhere exist special guardian angels. 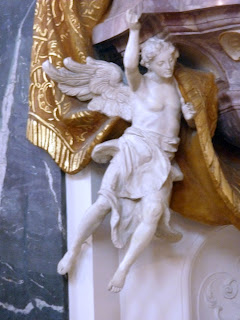 In my hometown we have an institution called "Vesperkirche" (if you understand German or don't mind running a site through an online translation machine, you can learn more about this charity project here). 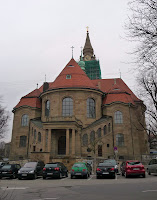 That means getting a complete meal in the church for very little money. First it was only for the homeless and other underprivileged poor individuals. But now it is open to anybody, for you and me as well. Of course those who can afford to are supposed to pay a bit more. The philosophy behind it is that all guests get together, the tables seat 12 each, and you can find at the same table all kinds of people: Academics, craftsmen, managers, lonely old ladies and men (mostly widowers), young girls and boys, families with children, and also down-and-outs with greasy hair and more and less smelling.
And it works: They are all chatting, talking and discussing together, while eating.
Everyone gets served, they only have to take a seat and order what they choose between 2 meals (one vegetarian). And the tables are prettily decorated with primrose flowerpots, table-sets and candles. The atmosphere is bright and cheerful.
Now the other side: There are needed every day about 60 helpers who do the work, 50 cakes (homemade or bought, but always donated). We serve daily between 460 and 500 meals, and that's a great logistical challenge, and that is what impresses me every time, how fantastically everything is organized. We helpers are all voluntary workers and no professional caterers. There are old and younger ladies, old and younger men, rich and poor, it's amazing to watch the high boss and owner of a big store washing dishes or serving tables. And one does not have to belong to the parrish, all are free, lots are in no confession at all. 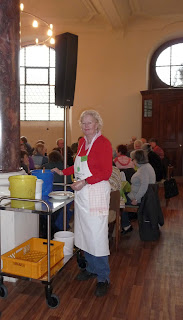 But now my angel-story:
Once I was serving a large tray full of hot soup, the tables are placed rather close together with very little space to move, and I was bending to serve the plates. Then it happened: The soup bowls began to slide, because I was not holding the tray straight. Everyone around the table held their breath, so did I, and I tried to juggle to avoid pouring the hot soup over the lap of the lady near me! Finally I managed to catch the tray again horizontally  without an accident, what was nearly a miracle. Everybody was relieved, they nearly applauded me for my performance. ;-) And the old lady said: You know, here in this church there are exactly 63 angels (of stucco), and one of them was just with you! 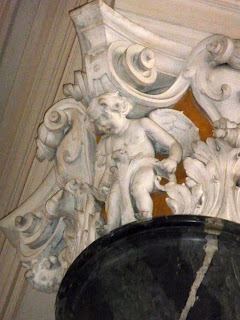 - - - - - - -
All pictures taken by me when I went to have lunch there this week with my Dad on one of the days my Mum worked there.
Apart from the full meal (soup, main course, salad, coffee and cake for 1,50 Euro), there's loads more there at the church for those who are in need: two different daily newspapers every day, there is a kids' corner with toys and picture books to keep the little ones entertained while their parents or grandparents finish their meal in peace; second-hand clothes, a hairdresser, open clinic, sewing and mending service, hand massage, and sometimes a solicitor is there to offer free advice. While anyone can sit down for a meal, all those other services are meant exclusively for homeless and other poor people. In my opinion, a good way of making sure donations (in the shape of money, goods, a home-made cake or your very own time and energy) really get to where they are needed. And the churchy bit is not overstated; nobody preaches, nobody expects particularly pious behaviour in order to "deserve" help.

The church itself was built in 1903, when there was still a king in the castle and my hometown was still very much an active garrison. It was built specifically for the military people stationed in and around the town. After WWII, it was re-dedicated and is now called Friedenskirche, which means church of peace. Apart from alcohol being sold at garages, can you think of anything more contradicting than asking godly favour for one's instruments of war and death?! Well, I can't, but let's not go there, at least not now.
Under many aspects, this church is unusual; there is no darkness, but everything is airy and in bright colours. And I have never seen Jesus represented in a church like this, i.e. not on a cross: 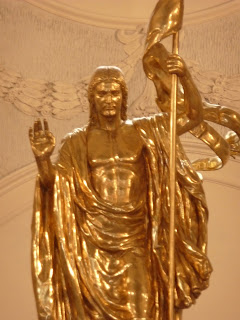 Clearly a super-fit man from all the walking the length and width of Palestine, and no junk food and chocolate in those days!

Sorry - this was supposed to be my Mum's guest post, and here I am, blabbing on about a subject I don't think you've ever heard me go on about before.
Posted by Librarian at 20:23