This was my souvenir from Jersey - bought at the airport, while waiting for our delayed flight home. I know it sounds strange to bring home from Jersey a book set in Yorkshire, but I saw this one and could not resist. 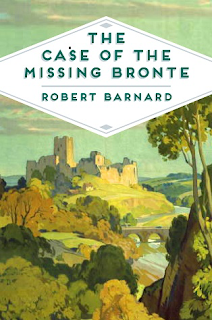 The author's name, Robert Barnard, seemed familiar, but I knew I had never read anything by him. However, he has been mentioned on Nan's blog several times, and her reviews very often make me want to read what she has been reading.

Detective Trethowan and his wife are on their way home from a family gathering when their car breaks down. This unlucky event happens in a Yorkshire village, where they are forced to spend the night. Before retreating to their B&B, they decide to have something to eat at the pub. It is there they meet an elderly lady who claims to have the manuscript of an unknown Bronte novel in her possession.

Soon afterwards, the elderly lady's home is burgled and she is assaulted, ending up in hospital in a coma. Trethowan is called to the case and does not only have to find out whether the manuscript is a real Bronte (and where it is now), but also who of the several interested parties is fanatical, scrupulous and wealthy enough to go to such lengths.

The pace of the story is pleasant - neither too hectic nor too slow -, as is the language. Witty but never vulgar, on a good level but never exhaustingly high-brow.

Nobody dies, although there is some bloodshed. It did not take me awfully long to suspect the true culprit, but there are still twists and turns enough to keep up tension until the end.

I did enjoy this book a lot and shall be looking for more by Robert Barnard, who sadly died in 2013. It was the third of seven cases for Perry Trethowan, so it will be fun to read the first two, and the next four. The only negative thing I could say about "The Case of The Missing Bronte" is that it is rather short.

PS: I know the name Bronte is spelled correctly with two dots on the e, but I don't know how to produce that on my keyboard, and right now do not have the time to investigate.
Posted by Librarian at 07:39