Normally, I try to be nice in my book reviews and hope that even when I have something negative to say about a book, it does not come across as too harsh. Admittedly, I can be a bit on the persnickety side when it comes to spelling and grammar, but I don't think I should be apologetic about wanting things to be done (i.e. written) properly and correctly. 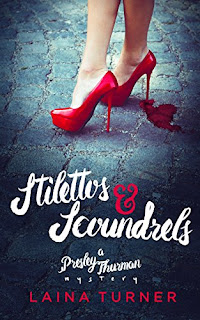 With "Stilettos & Scoundrels" by Laina Turner, I can't be all that nice, because it really wasn't a good read. Sorry - I assume the author has put a lot of effort into making her dream of being a writer come true (this was her very first book), but just a little bit more of that effort, preferably when it came to editing, would have made a noteable difference.

The idea for the story isn't bad at all: Presley, a woman in her 30s, fashionista (and coming across as rather shallow, so I can relate to that...) and recently out of a relationship, is fired from her job when she finally makes it clear to her boss that she is never ever going to succumb to his advances.
A friend asks her to write an article about a Senator who happens to live in the small town she grew up in, and Presley jumps at the chance to not only earn some badly needed money but also to turn her back on the big city for a while and regroup in the homely environment of her parents' house.

When she arrives at her home town, she finds some of her old friends and school mates changed, while with some she can instantly pick up where they left off ten years ago.

She has an interview with the Senator - only to learn the next morning that he was murdered the same night, and she was probably one of the last people to have seen him alive. Does that make her a suspect? What's going to happen with the article she was supposed to be writing about the man?

Presley's curiosity makes her turn into her very own version of a private investigator. She finds out people's hidden agendas, secrets in their past and present, and gets herself (and others) into real danger more than once.

It is self-understood that a love interest becomes part of the story early on.

That does not sound too bad, does it? It could have been a nice, easy, "cosy mystery" type of read. But it wasn't, because I was constantly annoyed by the bad writing style, the heroine's behaviour and the "surprises" which weren't really surprising.

I would have actually done myself a favour if I had simply stopped reading after the first few chapters, but somehow I was still hoping for the book to improve, and the story to grip me. My train trips to and from work happen anyway, so I did not waste too much time, but I can only recommend NOT to read this.
Hopefully, Laina Turner's writing (or the skill of her editor) has improved; according to her own website, she is a "best-selling" author now. Can so many readers be wrong, or am I the one to be too picky?

PS: After having checked the reviews on Amazon (where I got this book as a free kindle version), I find that I am not alone in my assessment.
Posted by Librarian at 08:11