Witches, Woodland and a Rocking Horse

The first week of November continued as nicely as it had begun (see previous post for the Monday).

On Tuesday, the 3rd, my sister came for a brief after-work-chat and a cup of tea. Wednesday saw me spending my lunch break at my parents', with - as always! - delicious home-cooked food. Thursday was the 11th anniversary of my husband's death, and my Mum joined me in the evening for a drink and some reminiscing. On Friday, I took the usual trains to spend the weekend with O.K.; everything went smoothly that day, from the meetings at work to finding my reserved seat on the long-distance train unoccupied and the trains being on time. Saturday had us doing some work in and around the cottage; we had a brief visit from a couple of friends (outside, if you want to know) and later managed a quick walk around the village, catching the mellow light of sunset and dusk.

On Sunday, the 8th, we were free to do as we pleased, and of course that meant a hike! Friends and family had told us of a circuit called Hexensteig (Witches' Climb) where we had not walked yet. They warned us of steep and exhausting ascents and descents, and I was a bit worried, knowing how hard I find going uphill. We still decided to go for it, packed our rucksacks with the usual collection of water bottles, sandwiches and other food, and set off.

The circuit starts and ends in the small town of Lautenbach, about half an hour's drive from O.K.'s village. As it was a beautiful and rather mild day, many other people were out walking and hiking, but I find I do not mind that so much if I am mentally prepared for it. Also, there were suprisingly few cyclists about.

Most of these pictures are O.K.'s; I only took very few. This first one looks as if it was overcast, but it was just that moment when the sun was behind a haze, as we were climbing up the path and looking back over Lautenbach: 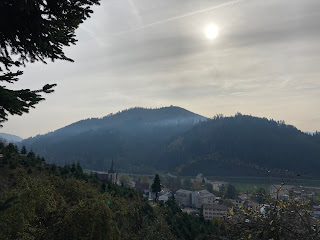 See? The sky was actually more blue than cloudy: 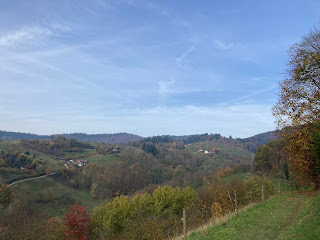 The witch theme is carried on throughout the circuit, like this hut adorned with brooms: 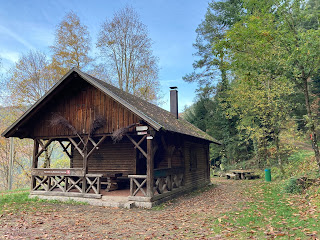 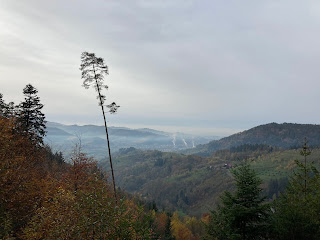 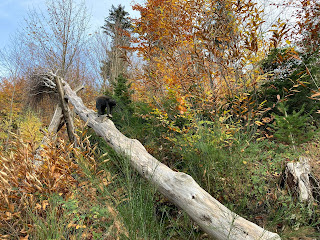 We were not even half way up yet, but I really needed to sit down a minute, and take off one layer of clothes: 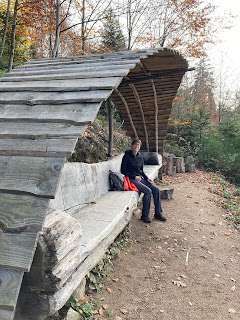 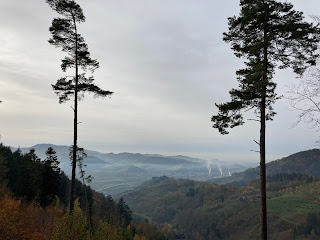 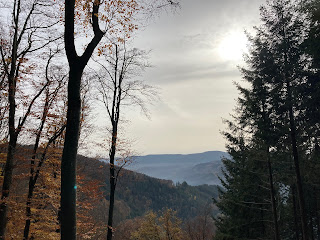 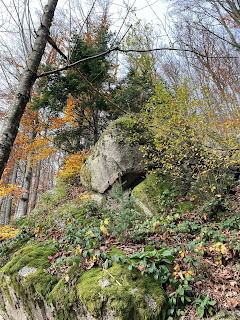 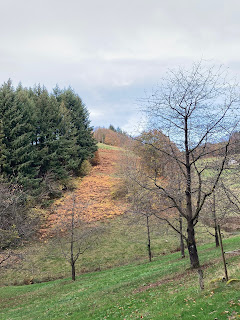 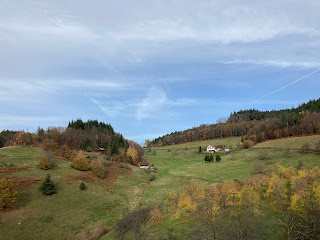 Don't you love walking on a carpet of rustling leaves? 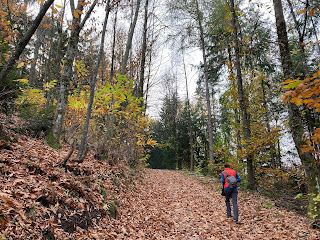 This tiny witch house was really cute; a couple were sitting in it and asked us to take their picture. We came across them a few more times in the course of our hike. Had they not been there first, we would have probably sat in there for our packed lunch. 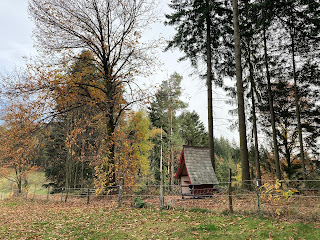 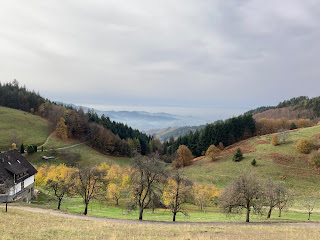 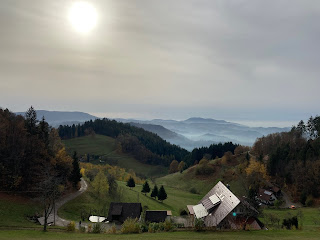 Instead, we walked on until we came to the next witch house. This one was bigger than the first, but there were many other people nearby, families with children, so we just had a quick look. A former colleague of O.K.'s was there, too, with a group of four. We chatted with them while they were finishing their meal, and then took their seats on the wooden benches and table as they continued their walk. 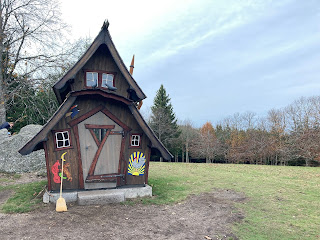 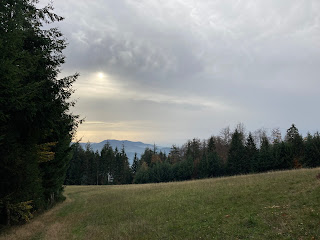 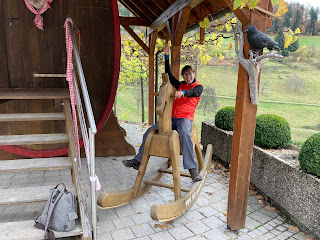 The path was taking us in and out of the woods, up and down, and past this big rocking horse - of course I could not resist, and had to have my silly moment! The hut is made out of a giant wine barrel, meant for visitors of the nearby winery to have wine tastings there. Due to corona, it was shut. 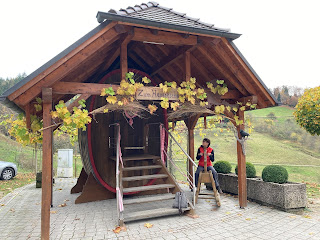 The afternoon was getting on, and the light changed; it was not yet sunset, but looked very much like it with the clouds and haze. At this point, we met O.K.'s former colleague and his group again, and joined them for a quick drink - just one tiny one, as O.K. still had to drive us home, and we definitely did not want to make the descent in a tipsy state. 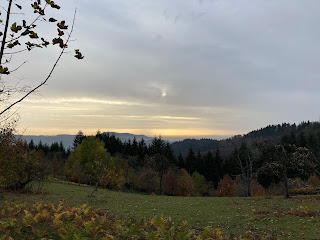 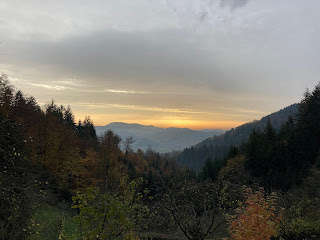 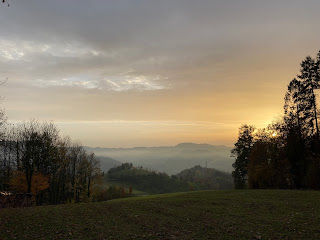 It was now 4:30 pm, and this time, it didn't just look like sunset - the sun really was setting. 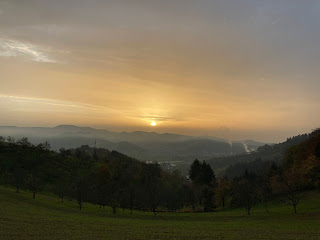 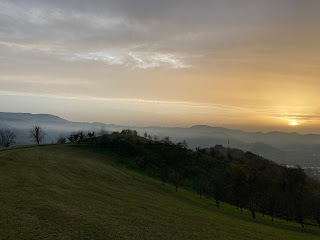 We were almost there now. 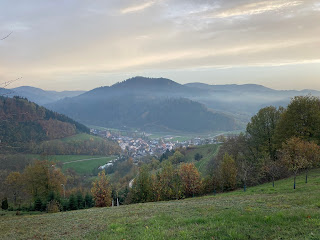 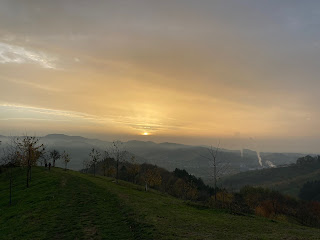 Just before the path leads back down into Lautenbach, there is another place with benches and tables prepared for walkers and hikers wanting a rest, along with a fridge filled with drinks one can buy, leaving the money in a box. 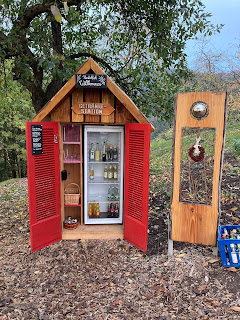 This witch looks rather uncomfortable on her broom, doesn't she! 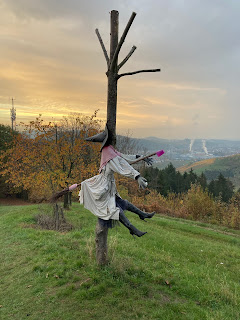 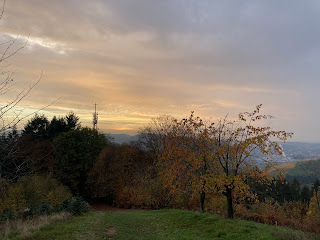 We arrived back at the car about 4 1/2 hours and 16 km later, including the two breaks that had been longer than usual because of us meeting the former colleague and his group.

At home, O.K. made us a delicious meal of fried mushrooms. I was very tired; the hike had been really beautiful and much fun, but also exhausting, and I was in bed just after 9:00 pm (also knowing I had to get up at 5:20 the next morning for the trip back to Ludwigsburg).

Another themed circuit starts and ends there, it is called the Devil's Climb, and I am sure we will walk it sooner or later!