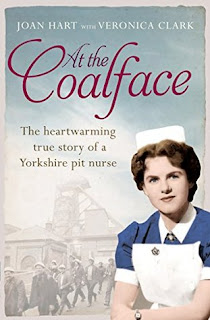 At the Coalface: The Memoir of a Pit Nurse

by Joan Hart with Veronica Clark

This was another free download from the kindle shop, part I of III. So far, I have not yet decided whether or not to buy the other two parts.

Joan Hart (the photo on the cover is really her as a young nurse) tells the reader about her life, very much in her own words - it is obvious she is not a writer by profession, and it feels more like listening to the reminiscing of an elderly aunt or good neighbour. The writing is unpretentious and genuine, with some down-to-earth humour thrown in.

She was born in South Yorkshire in 1932, and entered nursing training as soon as was legally possible, at the age of 16. Her work made her move to London, before she returned to her home county and became pit nurse at Brodsworth Colliery near Doncaster in the early 1970s. There, it took a while before the miners accepted her - a woman! -, but she persisted in her efforts just like she had always done more than what was expected, nursing being her true passion.

Having no children of her own, she kept working throughout her marriage, and maintaining a good, loving relationship with her husband was not always easy. After a period of separation, the two of them were closer than ever, and gave each other full backing and support in everything they did.

Reading about how the concept of what is good and necessary for patients - especially when they are children - has changed over the decades, and at the same time learning of the life and work circumstances and conditions of an average working class woman who made her dream come true against the odds, was really interesting.

It is the real story of a real person, not a novel where you expect the heroine to encounter all sorts of obstacles, only to fall into her hero's arms at the end of the book. I might go and download the following two parts, after all.