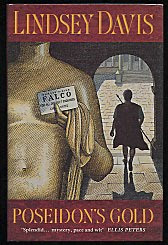 
An all-over good read - and I just am sorry for not having paid much attention for most of the book. I promise I'll do better with my next read.
Posted by Librarian at 16:59