With the onset of spring, I usually have an increased craving of fresh (i.e. uncooked) foods such as salads and raw vegetables. This week, I had several such meals for both my lunch break and in the evenings. Here are just two of them, when I remembered to take pictures: 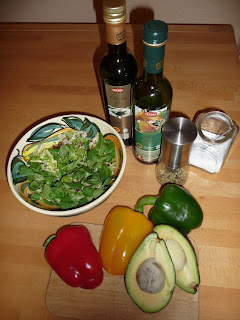 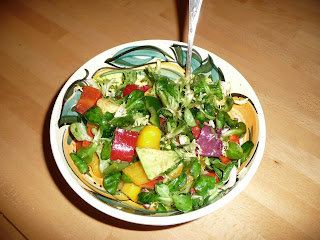 This salad consisted of half a bag of a ready-to-eat mix of leafy stuff such as lamb's lettuce, radicchio and frisee lettuce, one whole avocado and half a red, green and yellow pepper each (the other halves I had eaten the day before). Yellow peppers are my favourites - I love eating them just like that, without any addion, as I did here and many times since. The salad was dressed with a simple vinaigrette, the recipe for which I posted here. For this particular salad, I went a bit easier on the olive oil, since the avocado already contains quite a lot of fat without adding extra oil.

Some weeks ago, I had come down with a stomach bug which made me get on rather too intimate terms with my toilet. Thankfully, it was over after two days, but for those two days, nothing I ate would stay with me, and I was so glad for the working-from-home arrangement - and even more glad for my parents being so close! They came here both days, bringing coke (normally, I drink just tap water all day) and salted pretzels and rusk for my poor tummy, and generally making sure I had everything I needed.

The rusk I never touched until this week, when I turned it into a nice lunch for me, along with half a cucumber (another left-over from one of the salads I had during the week) and the goat cheese I like very much and regularly get from the supermarket: 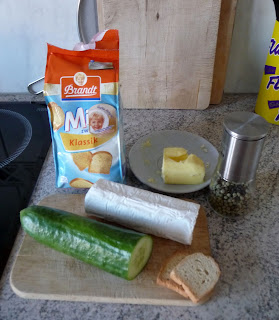 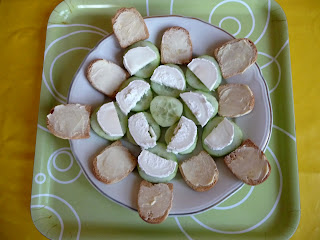 So, in culinary terms as well as where the weather was concerned, this week was very much spring!