A book that has deeply touched me, creating a lasting impression like no other that I have read recently, is "Forget-Me-Not" by Ruth S. Ozan. 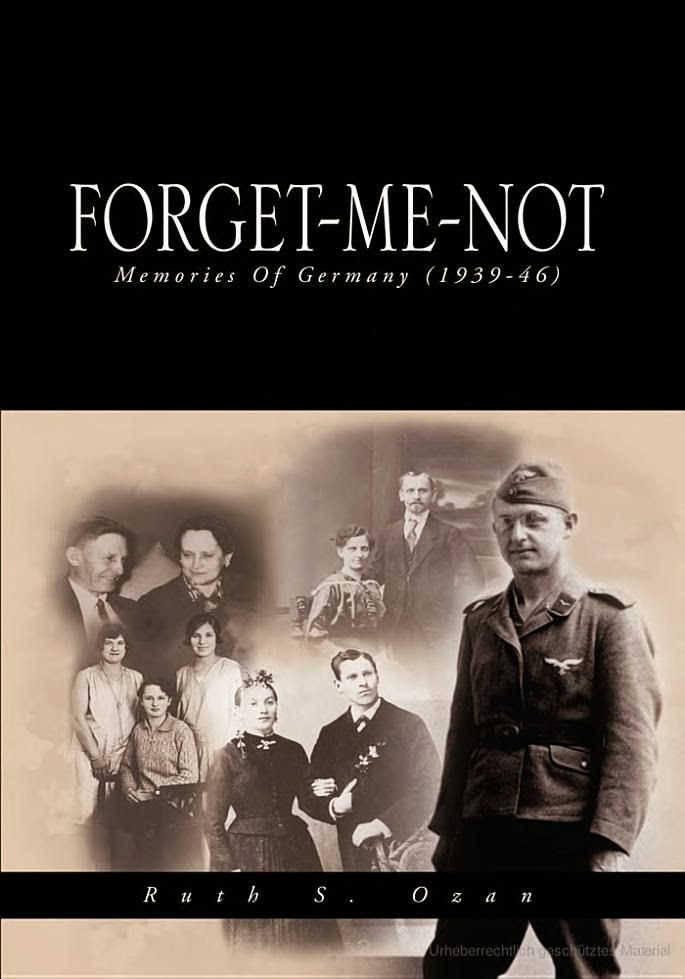 As an autobiography, it is far from complete: apart from pro- and epilogue, it spans only a few years in the life of the author, from 1939 to 1946. But those were crucial years in more than one way. Not only did they shape the attitude and character of young Ruth, but many of the events that formed our entire world took place in those few years, extending their influence from the past to the present and future of so many.

Ruth’s parents are German immigrants living and working in the US when she is born. In 1939, the family decide to go back to Germany because of a job offer from his old work place (the Krupp steel factory) her father can’t resist. At seven years old, Ruth is happiest where her parents are, but finds some things in her family’s country of origin hard to understand. She soon learns not to ask too many questions; her parents are often unable, sometimes unwilling, to answer them. But she is not stupid and notices things happening around her that should not be happening, such as an elderly lady being served last at the butcher’s because she is Jewish and wears a yellow star sewn to her coat.
Unfortunately, the family have chosen the eve of WWII for their return to Germany, something they were not aware of at the time, but which had consequences on every family member in a different way.

For Ruth, the outbreak of the war means the start of a period of instability in her young life. Time and time again, she is put into the care of more or less distant relatives, and at one stage even left at an orphanage. While the pushing about of the little girl from one place to the other is not always understandable (her parents had more children after her, so why was she sent away? Why did they have so many children if they were not able to look after them all?), it was not unusual – and obviously the most reasonable thing to do – for children from cities to be sent out in the country during the war, where they were safer from the bombings, and more food and fresh air was available.

The little girl gets so used to being separated from her family that she does not even want to go back with her mother when she has the opportunity. Instead, she really takes to country life and spends the happiest time of her years in Germany in a village with one of her aunts, who loves her very much and treats her like her own daughter. It is during that time that Ruth has the experience of sowing a field of wheat, which leaves a lasting impression on her young mind and heart:

"I am sowing a field of wheat! It will grow and when it is tall and golden, the wind will make it wave back and forth, and it will be my field, my crop. I'm making something live."

As the war comes closer to home and her father is drawn into the army, her mother and siblings come to live in a small country town together with Ruth. For the first time in years, she lives with them again. During the last terrible months of the war, all public life falls into disorganization. Regular schooling stops, and everybody just tries to get by and survive somehow. When finally the war ends and the Americans reach the small town, it is a new beginning for Ruth and her mother: They are among the few people who speak English; her mother’s help is enlisted for translating between the townspeople and the American military, and Ruth, now 13 years old, has her first kiss.

Various events and especially the attitude of people around her convince Ruth that there is no future for her in Germany. She wants to go back to America – this time, she is separated from her family on her own initiative.

Throughout the book, it is obvious that the author really lived through all the events described. The thoughts and ideas a little girl may have about the goings-on around her, with no understanding of politics, are very much like I would imagine a child really thinking at that age. Nothing suggests bitterness or trying to find anyone to blame for what certainly was not an easy, care-free childhood. I really came to care about Ruth and her siblings, and liked the way the book‘s title „Forget-Me-Not“ is explained by and by.

Mrs. Ozan is, to my knowledge, still alive. I have not found an author’s homepage for her, but wish I could write to her, letting her know how much her book touched me. It is available in German and in English. My mother, who was born the year before the war ended, read it in German and recommended this wonderful book to me. I, in turn, recommend it to all of you.
Posted by Librarian at 07:41