„Jugend zwischen den Kriegen“ means „Youth Between the Wars“, and that is exactly what this book is about. 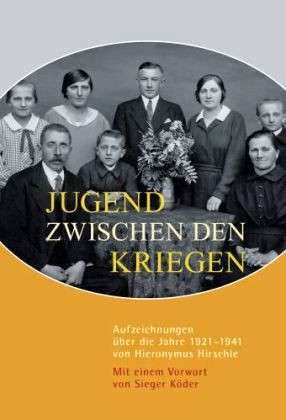 Its author, Hieronymus Hirschle, never set out to become an author, and his writing style is charmingly simple, as if he had just wanted to put everything he remembers of his childhood and youth into writing – which is what he did. His written memoirs were found by his daughter after his death, and published in three volumes. This one, dealing with the years 1921 to 1941, is the first.

Hirschle is a Swabian surname and literally means „little stag“. Hieronymus is an oldfashioned Catholic name, the name of a Saint, and its young bearer never really grew to like it; he always had to spell it out for people in order for them to write it correctly, and he much preferred simply being called „Mus“ by his school friends.

The Hirschle family lived near the village where my Uncle lives, the same Uncle who gave my Mum the book by Ruth Ozan, which I have posted about here. A close relative of Mrs. Ozan’s used to live across the road from my Uncle, until she died a very old lady some time ago. Ever since my Uncle bought a house in the village, he has developed a keen interest in local history. „Jugend zwischen den Kriegen“ deals not just with Mr. Hirschle’s personal history, but also reflects the situation of the village and its inhabitants in those years, as well as the wider picture of what was going on in Germany. As my family and I know the village from many visits to my Uncle and Aunt, we were interested in reading this book as well as the one by Ruth Ozan.

When Hieronymus is born into a modest farming family, the youngest of five children, the event is described as not being much different to the birth of a calf or a piglet. No fuss is made, it is a joyful event, but just normal day-to-day business on a farm. Nonetheless, the Hirschles are a loving, close-knit family; how much the parents love each other and their children is brought home poignantly to little „Mus“ when one of his older brothers dies at the age of 12, and he finds his mother weeping harder and more bitterly than he has ever seen before.

Growing up on a farm in the 1920s meant a lot of hard physical work, rising before dawn, but nobody wasted a thought about it – it was just normal life for them. They were poor, but did not walk hungry because the farm yielded enough to feed the family. And Hieronymus‘ mother took her faith seriously; she considered it her Christian duty to really love all men and treat them as equal, helping those who were poorer than herself with food. She stood up against injustice when she witnessed it, and never stopped buying from Jewish merchants when Germans were discouraged from entering Jewish shops. She taught her children many a lesson in altruism, and had the deep love and respect of them all. In fact, the love for his mother is central to Hieronymus‘ life, and extends to his home village, to „his“ woods and fields, paths and trees, flowers and animals. He is a patriot in the best sense of the word, and does not understand how his noble sense of belonging and his love for his Heimat (there is no real equivalent to this word in English, I think) is abused by the Nazis and turned into something utterly wrong. He has learned from his parents, and feels in his heart, that it is wrong to act against others simply because they have a different background, come from a different country, speak a different language or look different, but he still joins the army as a volunteer, thinking that it is his duty to defend his beloved Vaterland.
It does not take him long to understand that there is nothing really glorious about the war, but it is just when he begins his life as a soldier when this first book ends.

To read how farming folk, villagers and small town residents used to live in the 1920s and 1930s, described not by some historian, but as the vivid memories of a boy who was there, was something I enjoyed very much. There are many touching scenes and thoughts expressed in the book, and I keep thinking of this and that, recalling what I have read.

The second volume will mainly speak about the war, and how Hieronymus Hirschle ended up as a Prisoner of War, which I am sure will not make for such idyllic scenes as the first part of the trilogy. But I am looking forward to reading it, because I am sure that „Mus“ will not have lost his belief that there is some good in everyone, and something to be learned from every situation.
Posted by Librarian at 20:42