My birthday table was, this year as every year before, once again laden with presents from those who care about me. Each gift was the obvious result of someone thinking about me, and finding something they were sure I would like.


Each and everyone was truly appreciated - but it is inevitable that some gifts stick out more than others. For instance, I was given plenty of coconut-flavoured sweets and chocolates, which were of course meant to be eaten, and are long gone since.


Other items were intended to create a more lasting effect, and one of them was the book I have just finished reading: "An Astronaut's Guide to Life on Earth" by Chris Hadfield.


It was from my sister, part of a stack of books she gave me in the hope I'd finally start reading something better than a lot of what she finds me reviewing on my blog. With Chris Hadfield's book, she was certainly right! Knowing that I have been interested in all things Space for decades, she could be certain that this particular book was going to be a big hit with me. And so it was! 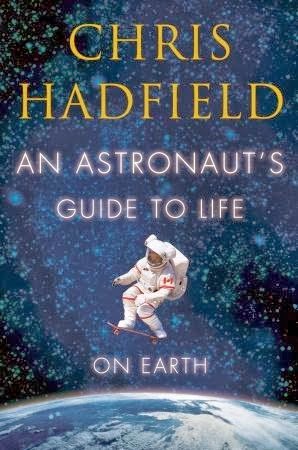 The author is a (retired) Candadian astronaut who has been in space on several missions, including his last one, a long-term stay aboard the ISS, where he served as commander for some months. He has become known to a wider public through his youtube video, performing David Bowie's "Space Oddity" (with adapted lyrics) on the ISS. Nobody, least of all himself, had expected this video to become so viral - what started out as a fun idea from one of his sons ended up being viewed millions of times during its first three days online.

Now, don't get the wrong impression about this book. It is definitely NOT yet another celebrity's attempt at milking their short-lived status. The Space Oddity thing is mentioned only briefly towards the end of the book, and clearly conveys how amazed the author was when he became aware of the video's impact. Most of the time, the book is just what its title promises: a guide to life on earth, nicely embedded with an autobiography.

We learn about Chris Hadfield's early fascination for space travel, and how for many years he did not think it actually possible to become an astronaut himself. We also learn how, in spite of not thinking it probable, he did a lot to achieve that unlikely goal, and how, against all odds, he reached it. Not everything went smoothly all the time, but he had determination and dedication, plus the very important support from his wife, family and friends.

Chris Hadfield gives some unusual advice, such as always aiming to be a Zero, sweating the small stuff and the power of negative thinking. All of this advice is presented with a good mixture of humour and seriousness, and makes perfect sense. Almost as if by chance, he also talks about what it is like being an astronaut (which usually means spending a lot more time working very hard on earth than flying in space), how a mission is prepared (and why it takes years of preparation even for a comparatively short ride), what living aboard the ISS is actually like, and all that space travel involves, from pre-flight quarantine to launch, from re-entry and landing to the considerable physical and mental strain experienced for weeks, even months, afterwards.

I'm pretty sure that i can deal with what life throws at me because I'Ve thought about what to do if things go wrong, as well as right. That's the power of negative thinking.
The CSA's [Canadian Space Agency] budget [...] is less than the amount Canadians spend on Halloween candy every year [...]. Similarly, NASA's budget is not spent in space but right here on Earth, where it's invested in American businesses and universities, and where it also pays dividends, creating new jobs, new technologies and even whole new industries.

This is a book I recommend to everyone. Even those who are not at all interested in human spaceflight will enjoy it, I am sure. It does not make you want to jump up from your armchair and ring NASA to sign up for the next astronaut class, but it does teach you one or two things about life on earth, things we'd all do well to remember from time to time.
And, just to add one more good thing about this book: I did not find any typo or example of bad editing. Not a single one!
Posted by Librarian at 08:19