„The Human Machine“ is not a work of science fiction, dealing with cyborgs as the title could suggest, but non-fiction by Arnold Bennett first published in 1925. Its main goal is to show the reader that it is possible to use one’s own brain to a great extent and therefore improving one’s own life significantly, without depending on (or blaming!) circumstances that can be controlled by ourselves, if at all, only in a limited way. 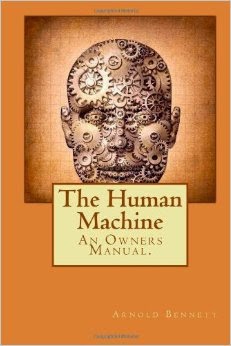 It was a delightful read, although I did not always agree 100 % with the author’s theories. But everything he says is presented in a chattily confidential manner without ever being condescending or too banal. In fact, the style is elegant enough to make this a good book even for someone who is not overly interested in the subject, and the relative shortness adds to its being more of a pleasure than a tedious struggle from page to page, as can sometimes be the case with theoretical works on the subject of the human brain.

The author starts by comparing us humans to a machine we have no manual for. This instantly reminded me of a friend of mine who has been using very similar words when talking about how wonderful he finds the discoveries he has constantly been making about himself and in connection with others in the past years.

With each chapter, more reasons for wanting to exert the fullest possible control about one’s brain are given, and also suggestions as how to get there – eventually. Nowhere does the author promise a “miracle” of instant inward and outward change of a person; instead, he admits that it will be a continuous process, not free from setbacks, probably for a year or more before success becomes evident. He also dedicates a chapter to how useless the striving after material goods is in contributing to real happiness and to perfect the “art of living”. Altogether, I was as much entertained as intrigued by this book, and as it was of course a free find at the kindle store, I can recommend it to anyone who would like to read something different for a change.

The author mentions Annie Besant as the author of “Thought Power”, calling it “…one of the best books of this astounding woman”. Since I have read Mrs. Besant’s autobiographical sketches not long ago (the review is here), to come across her once again so soon, after I’d never even heard her name until quite recently, was interesting.

Arnold Bennett is yet another one of those prolific and rather popular authors I had never heard of until I found one of their works in the kindle store for free. He lived from 1867 to 1931 and wrote many novels and short stories, but also numerous works of non-fiction. He worked as a journalist and in Public Service. He lived in France for some years and married a French lady. They separated 13 years later. For the last ten years of his life, Bennett lived with an English actress he had fallen in love with. She changed her last name to Bennett without ever being legally married to him. They had a daughter together. Bennett died at the age of 63 from typhoid.
A quirky bit of trivia about him I found on Wikipedia: “Bennett is one of a select number of celebrities to have a dish named after them. While he was staying at the Savoy Hotel in London, the chefs perfected an omelette incorporating smoked haddock, Parmesan cheese and cream, which pleased the author so much he insisted on it being prepared wherever he travelled. The 'Omelette Arnold Bennett' has remained a Savoy standard dish ever since. It is served in several other hotels and restaurants in London as well.”
Posted by Librarian at 21:56