"Cybill Disobedience" is the title of Cybill Shepherd's autobiography which I happened to find for free on Amazon's kindle store. It was published in the year 2000 and has a very telling subtitle: "How I Survived Beauty Pageants, Elvis, Sex, Bruce Willis, Lies, Marriage, Motherhood, Hollywood, and the Irrepressible Urge to Say What I Think". 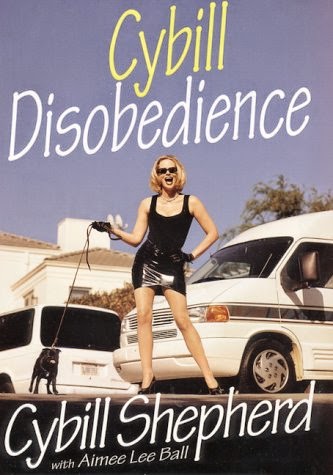 To me, Cybill Shepherd's name was known as that of an actress, and I could sort of put a face to the name but have never seen any of her movies or the various series she has starred in during the 1980s and 90s; nor have I ever heard her sing, in spite of a rather impressive discography.
That did not make reading her book any less interesting. The way her life changed from pretty girl with what transpires as a rather unhappy home life to landing her first modelling jobs and then on to becoming a movie star and singer, with a career that had many ups and downs, plus a complicated personal life to match, is described in what sounds like an honest, no-fuss manner. (I have deliberately chosen to say "sounds like", because I can of course not really tell how much honesty there is in an autobiography by someone I do not personally know.)

There is sadness in the book, but also a lot of humour. More than once, I found her choice of words quite wonderful. For instance, she says about her first phone call from Elvis that he had "a voice like melted Kraft caramels". Some of the people mentioned only go by nicknames such as The Suit or The Executioner, while others - her co-stars, husbands, partners and relatives - appear by their full names. Not everyone she worked with on or off camera gets away lightly, but there is no nastiness and nothing that sounds too outrageous to be true.

As the book was published in 2000, I wanted to know what happened in the 15 years since, and looked her up on wikipedia. Already in the book are described some of her activities for equal rights, and I was pleased to read that she was honoured in 2009 by the Human Rights Campaign in Atlanta with a National Ally for Equality award.

What do I think of Cybill Shepherd now, after I have read her autobiography? Well, she comes across as a very "human" human being - with just as many faults and strengths as everyone else, and she is not ashamed of admitting to the former and playing on the latter. Admittedly, I am still not overly interested in watching any of the movies or series she has been in, and I am not going out to buy one of her records anytime soon. But the book made for an interesting, entertaining and sometimes thought-provoking read, with the free copy showing only minor typing errors. Therefore, 4 out of 5 stars, I'd say.
Posted by Librarian at 19:08