George Rawlinson's "History of Phoenicia" was first published in 1889 (mine was, of course, a free ebook from Amazon's Kindle shop). Many of the methods historians and archaeologists use nowadays to learn more about the past were not yet invented, and some key finds had not yet been discovered. But there existed already enough material to provide the interested reader with a wide range of information about this ancient people. 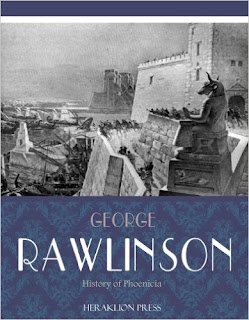 The Bible makes frequent mention of Phoenicia and the Phoenicians. Cities like Tyre and Sidon were well established and known throughout the world in which those who penned prophecies and the gospels moved.

The author bases his work on many more sources, though: Apart from the Bible, he cites numerous other authors (both ancient and modern), and of course he relies on buildings and objects found to describe the Phoenicians in much detail.

The book is neatly seperated into chapters, covering subjects such as the geography of the place associated with "Phoenicia", the origins of the "Phoenician race" (considered without any doubt a Semitic people), their architecture, arts, daily lives, religion, politics, commercial success and much more.

I must admit that I quick-read some of the chapters. Lengthy descriptions of each valley and for how many miles it runs west or south and how far it is from one river to the next were not what I was really interested in, nor was I keen on learning each and every battle all those city-kings fought against each other, or in changing alliances. But the chapters that described the ingenious way of building ports and walls, the way the Phoenicians tried to (successfully) establish peaceful commercial relations with most other people rather than attacking and destroying them, or risk being attacked and destroyed themselves; what we can deduct about their way of thinking from inscriptions in temples and on burial monuments; how modern some of their objects of daily use appear, how they simplified the more complicated alphabets and sylabets of great empires that existed before them; all this made for interesting reading on my way to and from work.

The author, George Rawlinson, lived from 1812 to 1902. He was thorough and clearly knew what he was writing about; whenever something could not be proved, he said so, and was not given to mere speculation. The last 20 % of the book consists of footnotes, giving the interested reader ample opportunity to learn more or conduct their own research. According to wikipedia, he was not only an Oxford scholar, historian and Christian theologian. In his 20s, he played cricket for the university and appeared in 5 matches considered first class.
He was married; wikipedia does not mention any children.

PS: I have just looked him up on the German version of wikipedia. While, as I said, the English one does not mention any children, the German one says he had NINE children - five daughters and four sons - with his wife Louisa.
Posted by Librarian at 18:15