Do you remember this post from last summer? If you don't, and have no time or inclination to click back to read yet another old post on my blog, here is a brief summary:

Last year in April, my Mum wrote this guest post with her recipe for Easter Bunny Cookies. They were a big hit with someone living on a different continent - you could almost say these cookies (or at least their recipe) travelled the world.
One very kind lady in Canada, herself a fellow blogger, shared the recipe with a friend, and they both decided to give it a try and made the cookies for two events: First to offer them as welcome nibbles to visitors at their church, and then in the shape of eighth-notes for a fund raising event at a women's music club.

On Monday, just after Valentine's Day, I received a special Valentine in the shape of a very kind email from the same lady. Once again, I shared it with my Mum, who loves how much her cookies are being appreciated - and that someone takes the time to let her know. Just like with the email I received last summer, again I asked the sender for permission to turn it into a blog post, along with the photos that were included in the email. And once more, the answer was "yes".


Another word on your cookies: they've had another outing. This time they were on the dessert table at a reception following a concert (13 Feb.) in the ballroom of Winnipeg's historic Moss House. 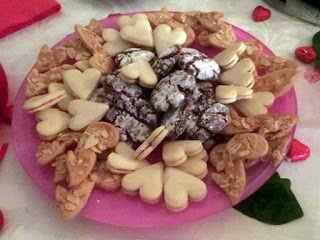 The high-ceilinged ballroom runs the full width of the house; light streams in through the front and back arched windows, and a very large bow window (not visible in the photo) area that accommodates a gorgeous grand piano on the east side.

Meike, you take your readers on tours - allow me, please, to take you on one. Moss House has a bit of a romantic history, and, I think, a notable love story - perhaps more than one, and I hope the brief history herein will light your imagination as it has mine. 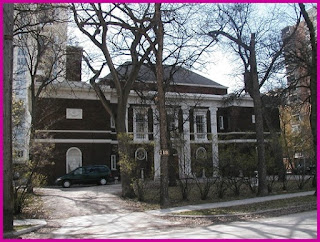 Moss House (1901) was built for the entrepreneurial Walter P. Moss, who had done very well for himself with one of the first department stores in the city in the 1890s. It remained in the Moss family until it was sold in 1956 to Max Kantor who similarily did very well for himself in the insurance business. Born and raised in Winnipeg, Max was a Canadian champion runner in 1938. (There's a story here of an athlete - one of many the world over - whose career was foiled by the War).

Max and his wife, Mireille Grandpierre, met in Paris, where they married following the liberation of France, and forthwith established themselves in Winnipeg. Mireille Grandpierre-Kantor was a world-class dancer who first performed at the age of 5. At the age of 8, following a performance of La Mort du Cygne, she came into acclaim as a protegee. She danced for the President of France at age 9, joined the Paris Opera at 11, and the Russian Ballet at age 15. In 1939, she was a world gold medal winner for France, and went on to become Prima Ballerina at the Marseille Opera.

In Winnipeg, Mme. Grandpierre converted the ballroom of Moss House to a barre and set up her Conservatory of Dance in a city that, despite its rich cultural history that included The Royal Winnipeg Ballet (1939), The Winnipeg  Symphony Orchestra (1946), The Royal Manitoba Theatre (1958) and The Manitoba Opera Association (1969) (among other cultural institutions), must have challenged her to the n-th degree! She and Max were married for 61 years until his death separated them in 2007. Mme Grandpierre-Kantor died the following year.

It was a lovely bit of synchronicity to be in Moss House in time for Valentine's Day, in the ballroom of a house filled once again with the sounds of dance by a Russian-born violinist with the heart of a dancer (himself a violin and piano protege), who opened the concert with a Tarantella, and later played Russian dance music as well.

That house caught my imagination the first time someone pointed it out to me, so after being there, I wanted to know a little more about it. Having decided to send the photos of the cookies, what could I do but give them context? I am now looking forward to reporting on the next outing (May or June) for which I will once again make the cookies in the shape of eighth-notes. Maybe photos, though, as few venues will have the history or romance of Moss House!

I very much enjoyed not only receiving such kind words of appreciation, but also learning about a place I am most likely never going to see for myself.

Thank you, dear K.! My Mum and I are also looking forward to reading about "our" cookies' next outing :-)
Posted by Librarian at 09:31