By no means all my reading is done on my kindle, or in English. I do read German books, too, and physical books will never entirely disappear from my reading life.

A friend of mine lent me this German work of non-fiction, published in the late 1940s: "Vorstoß ins Weltall" by Willy Ley. 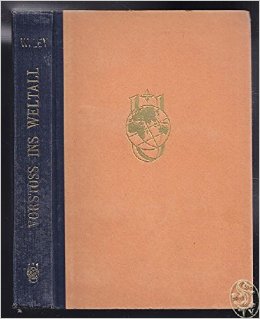 Maybe you have already come across one or two posts having something or other to do with space travel. It is a science I am very much interested in, and the name Willy Ley was of course familiar. Willy Otto Oskar Ley (1906 – 1969) was a German-American science writer, spaceflight advocate, and historian of science who helped to popularize rocketry, spaceflight, and natural history in both Germany and the United States. The crater Ley on the far side of the Moon is named in his honor.

Nazi politics made him flee his home country early on; via London (in 1935), he made it to the US, where he spent the rest of his life, and where he met again a man he already knew from their days as part of a group of early rocket enthusiasts in Berlin: Wernher von Braun. The two scientists co-authored books and articles about rocket science and both worked on Disney programs promoting spaceflight.

Ley's "Vorstoß ins Weltall" ("Advance into Space") is, first and foremost, a science book. But nearly anyone with an interest in space travel can read it, because it is so well written.
There is an alement of humour not often found in non-fiction books, and in my mind, I could almost hear the author's gentle chuckle at some particularly witty remarks.
Admittedly, I skipped some of the paragraphs containing mostly formulas and calculations, but I only have myself to blame for that, certainly not Mr. Ley.

From the little I have managed to find online, his wife Olga was a scientist, too: She wrote books about zoology, together with her husband.

Isn't it a little sad that this man, who dedicated such a large part of his life to space flight, died only a month before the first men landed on the Moon?

Anyway, I am glad I was allowed to borrow this precious book (the original 1949 print, in pristine condition), and will take good care of it until I'll have a chance to return it to its owner.
Posted by Librarian at 07:46