Dear friends in Blogland,
No matter whether you are regular or occasional readers, commenters or not, fellow bloggers or readers only:
Merry Christmas to you and your loved ones, and all the best for 2019!

My biggest Christmas wish is coming true: Having my Dad still with us. The four of us (my parents and my sister) will be able to spend Christmas Eve together, something that was not at all certain back in October when my Dad almost died.

And last week Thursday, we even went to the Christmas Market together! My Dad coped rather well, walking with his walking aid (he hates the thing but it really does make things easier). We all had mulled wine and some of the food traditionally offered at the market. My sister took this picture of us, and I am allowed to show it here: 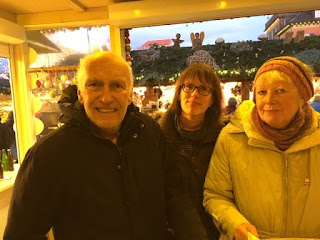 On Friday, I left the office at 4:00 pm, feeling like a runner who gets really exhausted on the last bit and is just glad to have finally made it to the finishing line. I won't go back to work until the 7th of January - such luxury!

Saturday morning saw me on the train to Offenburg; I spent the weekend at O.K.'s. It was the village band's annual concert on Saturday evening. I had helped with the selling of tickets a couple of weeks ago and heard O.K. practise a few times, but of course I had never heard the entire band playing the pieces. This year's motto was "Heros", and here is the play list:
I am sure my friend Kay will know most of them! Of the three extras, the last one was what must be one of the most popular Christmas songs in Germany (O du Fröhliche), and many in the audience sang along. The band played well, and the soloists were excellent. The village hall was decorated beautifully for Christmas. Afterwards, we had sparkling wine and snacks and talked to friends and family who had come to listen. We were home shortly before 1:30 am.

Sunday was rainy and windy and, after we had spent the morning helping with the clearing and cleaning of the village hall, a very quiet day for us, with only about an hour's walk between showers, and at 8:00 pm, O.K. took me to the station. Both train journeys were smoothly on time and not crowded, and when I arrived home last night at 10:30, I lit the four candles on my Advent wreath, had cup of tea and some chocolate and watched the second half of Midsomer Murders before going to bed.

My to-do list for today reads as follows:
As you can see, only the first three are done. Now I'm off to do the rest!
Update at 2:30 pm: more things ticked off the list!

Christmas Day will see me on the morning train back to O.K.'s, because his sister has invited us for lunch. I will travel back home again in the evening on Boxing Day. The 27th I intend to spend mostly with my family. On the afternoon of the 28th, I will once more be on the train to Offenburg - we are yet again invited somewhere, and again on the 29th. I am not sure yet what day I will be travelling back to Ludwigsburg, but I already know it will be by car with O.K., as we are going to celebrate New Year's Eve at my parents', with my sister and a friend being there, too.
Whether we'll be back at O.K.'s parents for their traditional New Year's reception (it sounds like a grand affair - in reality, it is just "us", the family, having champagne and a traditional regional meal) I don't know yet, as his parents have also had health troubles. In any case, O.K. has to work between Christmas and New Year but has the first week of January off, so that we get to spend a bit more time together.

Let me finish this post with pictures I took this morning from the Christmas book of my childhood, mentioned in above's to-do list. As you can see, it is very battered and well thumbed, but I would never, ever throw it away. 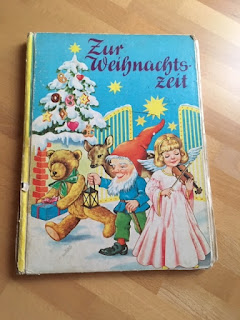 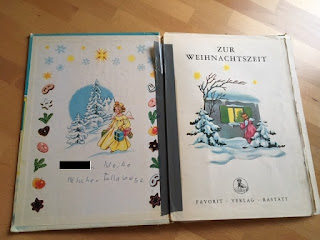 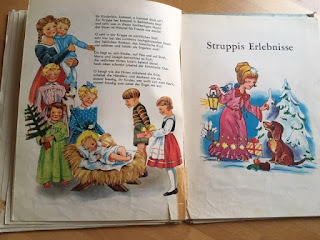 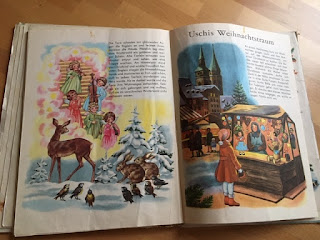 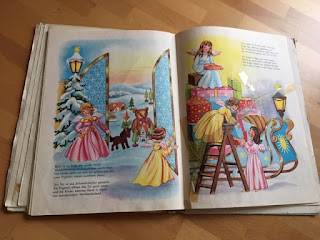 I do not remember exactly how old my sister and I were when we were given this book, but it always belonged to us together, and at some stage, we wrote our names and (wrongly spelled) address in the front. We made a few clumsy attempts to repair it when we were still kids, and they are just as much part of the book as the pictures, song texts and stories in it. The pictures coined my ideas of Christmas, and are very traditionally German; in style, they range from the 1930s to the late 60s.

What is your personal Christmas treasure you can not imagine this time of year without?
Posted by Librarian at 09:58