The Yorkshire Dipper by Maria Frankland is (in the author's own words) a gritty psychological thriller. 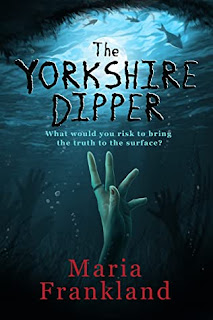 In summary, it is about women drowning in a river near a pub after they have been out drinking. At first, the police dismiss the deaths as sad accidents, since the river banks are notoriously slippery and unsafe at night, especially for someone under the influence. But when the death toll rises and a particularly persistent journalist finds out that the victims had something in common, the enquiry turns into a murder investigation. More lives are lost before the truth finally comes to light.

Each of the women who lose their lives are introduced in their own chapter, an unusual feature in murder mysteries.

The journalist who gets her teeth into the first cases and resolves not to stop until she finds out who is behind those deaths is a young woman getting ready for her wedding, while her fiancé is part of the same police unit tasked with looking into the "accidents".

I like the way the author describes how the relationship of the couple is influenced by their work, and vice versa; I also like how she writes about the young woman looking forward to her wedding and juggling the preparations with her freelance work and family life.

Then, a drastic turn of events about half way through the book unexpectedly cuts the story in two parts, while the truth behind the drownings does not come all that unexpected; I guessed relatively early on who was involved.

There is a sequel which I might want to get. I like the author's approach and what she says about herself and her writing on her homepage, and of course I like the Yorkshire setting, which was what got me interested in the book in the first place.