My first week back after our Black Forest Holiday was filled with lots of different activities and events, quite typical for me - and it actually felt pretty much like pre-pandemic times.

Some of what happened during that week deserves a post on its own, but I do not have enough time for that right now; I am still catching up here, talking about the week from May 16 to 22.

The photos for this post start on May 15, the Sunday that marked the end of our holiday and saw me traveling home from O.K.'s early in the afternoon. It was a beautiful sunny day, and after I had finished unpacking, started the washing machine and so on, I went for a sunset walk on the fields: 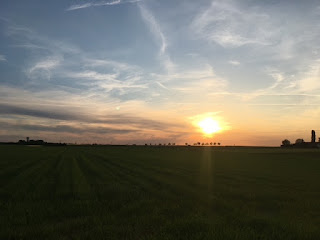 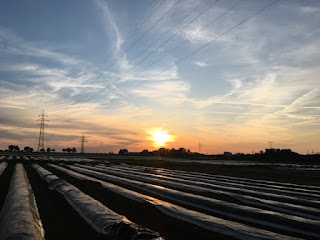 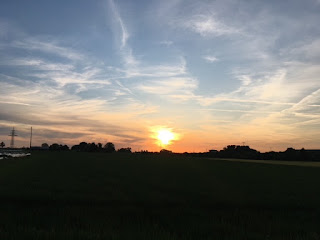 Monday, May 16, was uneventful; it mainly consisted of work and a walk on my own afterwards.

On Tuesday, May 17, my sister and I met up with our Mum at the Ludwigsburger Brautage - "Ludwigsburg Brew Days", an inner city fest dedicated to beer. Funnily enough, neither of us had beer. Instead, I started with an Aperol Spritz and then moved on to white wine. My sister and I were happy to have our beloved Dinnede - the special food we usually only get at our Christmas Market, as seen in this post about the last one in 2019, before everything stopped because of the pandemic. 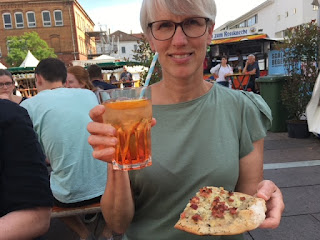 We bumped into a mutual friend there and spent a very pleasant evening out, not returning home late because my sister and I of course had to work the next day.

On Wednesday, May 18, I finally had a hair cut after work. My hairdresser is also my neighbour and something of a friend; we've known each other for many years, and there is always plenty to chat.

Later, my sister and I went for a walk together after she showed me "her" garden - an allotment she shares with her neighbours, and definitely something worth its own post if she agrees.

Thursday, May 19, was sunny but very humid and hot. I did not even feel like a walk! Unsurprisingly, the night brought a thunderstorm.

On the Friday (May 20), the sun was back, and I wrapped up work early enough to attend the opening of the grounds of a former factory adjoining Ludwigsburg's train station. That area has been abandoned for some time since the factory closed, but a while ago the city of Ludwigsburg acquired part of the land and intends to create a space for everyone, with offices, shops and restaurants as well as places for cultural events, community meetings and so on.

To start with, a doorway has been opened between the station and the area; chairs and tables have been set up, bunting strung and food trucks brought in. Two of my colleagues of my volunteer work were there, too, and we listened to the speeches, had something to eat and drink and a good look round. See if you can spot me in the picture: 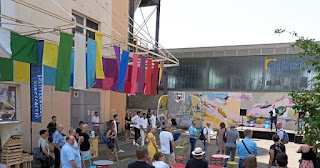 Saturday and Sunday were "alone" weekends for O.K. and myself. I needed the time at home to catch up with things after having been away for two weeks, and O.K. had an engagement with the village band to play at the next village.

I took advantage of being here for the weekend and on Saturday, May 21, accompanied another of my volunteer colleagues to a workshop run by the city for citizens, "Zukunftswerkstatt". Zukunft means future, and the workshop was looking at various aspects of how things need to (and can) change in our city to make it more sustainable, environment and family friendly, and so on.

It was held in a building which used to be the oldest public baths in our town, with a large swimming pool in the middle and individual bath tubs in other rooms, quite popular during the times when many people did not have bathrooms at their homes.

When my sister and I were kids, we often came here to swim (and splash about) with our Grandma, but neither of us have been inside the building since it closed down years ago. I love how they have kept it still very recognisable, but all is clean and freshly painted now, with beautiful lighting and a clever use of space: 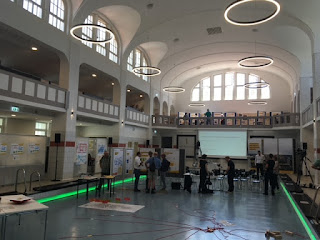 This was in the afternoon, leaving me with plenty of time for an evening walk across the fields to Benningen. Sunset was beautiful: 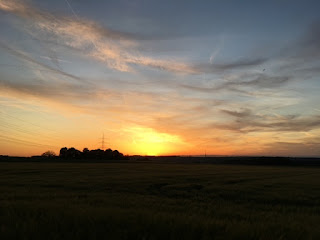 On Sunday, May 22, I was back at my sister's garden. I did a tiny bit of gardening (I don't know much about it, and she and a friend had almost finished what they meant to do that day anyway), and so I was mostly there to have fun :-D 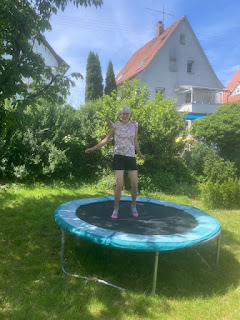 Let me finish this quick breeze through that week with an image of Fred Fox surrounded by flowers: 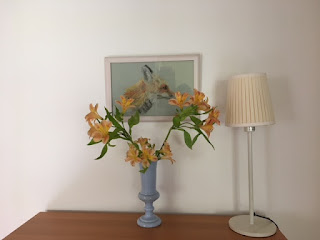