Absolutely fabulous was, in my opinion, the cocktail party I threw last night for my family and friends. The occasion? My 44th birthday. The location? My living room, kitchen and Third Room.
In German, numbers such as 11, 22, 33, 44, 55 etc. are called Schnapszahl, meaning schnaps number. And since I was 44 on the 22nd, I had the double Schnapszahl this year. However, I do not like schnaps, but since I really like cocktails, I decided to throw a cocktail party - the complete works, outfits and all.

The invitation I emailed to my family and friends some time before had this picture as its header:

The same picture appeared on the drinks menu that I had printed out and placed strategically all over the flat: 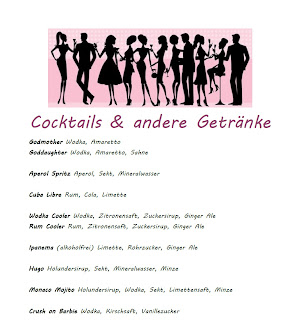 Preparations were easy - because I left most of the hard work to my parents, I'm afraid! (Yes, I truly am a lazy, spoiled brat sometimes.) What I did apart from writing and sending out the invitation and putting together the drinks I intended to offer, was this:


On Monday, my sister went with me to the biggest supermarket in our town. Usually, I do my grocieries shopping on foot - but with drinks, it is nearly impossible to do that without a car; they are simply too heavy to carry, especially when you need enough for 18 people.
Never before in my life have I spent so much money on drinks, and never before has my flat contained so much alcohol as in the few days between Monday and Thursday night :-) A glimpse of the inside of my fridge gives you an incling of what I mean - and there was plenty more in the cellar: 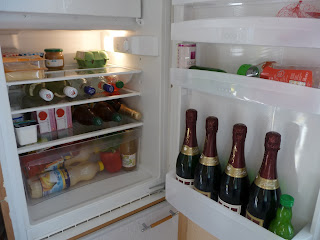 I bought these potted plants of mint. Mint is needed for a variety of drinks, such as Mojito. 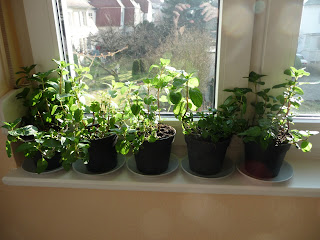 I also bought lemons, limes and two carambola (star fruit), the latter to decorate the drinks with (funnily enough, on Thursday night when we made and served the drinks, we never used the fruit - I still have almost all of it left as it was when I took the picture!). Kay, are you going to stick that one to your kitchen cabinet? :-) 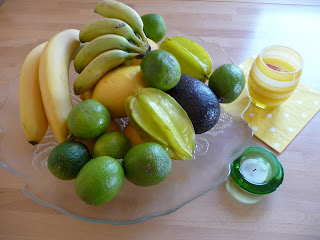 Normally, my living room (double-functioning as my office during work hours) looks like this: 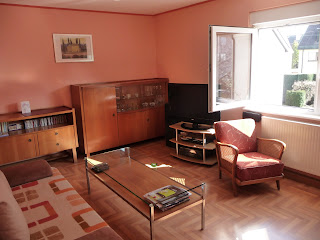 Not exactly party-like, I hear you say. But wait and see!


When I am on my own during the week, I need exactly one plate per meal, one coffee mug in the morning and one muesli bowl, and maybe one knife to butter my sandwich. On weekends, when RJ is here, I need a bit more china and cutlery, but I simply do not own enough to cater for 18, and so I asked my parents to bring more plates, glasses, forks and so on - as well as the food.
My parents being the most generous people I know, did just that. They brought this delicious cooking pot full of spuds, chick peas, meat, carrots, zucchini and peppers: 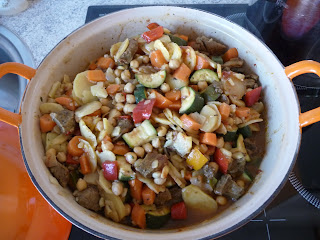 Months ago, my Dad made this dish (a much smaller amount of it, of course) and I had some when I went to my parents' for lunch, as has become my habit once a week ever since I started working from home. He had taken the recipe from the calendar he got as a freebie from the pharmacy; they called it "Morroccan Fry-Up". I liked it so much that I said to my Dad I wanted him to make this for my birthday. He replied, "I will, as long as it won't have to be for 20." So I invited only 18 :-D
My parents worked on this huge amount together, and even prepared a slightly smaller pot full of the vegetarian version for those of my guests who do not eat meat.


When they had dropped off all the food, plates, glasses and so on and left, I set about getting things ready for the party.
First of all, I put up this garland in the tiny hallway: 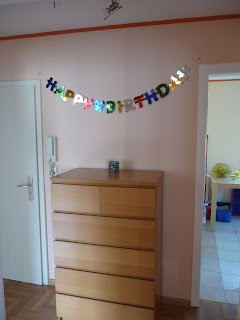 Then, I strung garlands across the ceiling in the living room and carried some extra chairs up from the cellar. 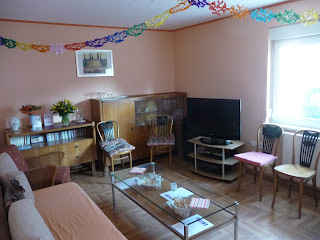 Next was the "bar" - the kitchen was the obvious place for that. One of my friends had agreed to bring his bartender equipment and mix the drinks for us. Yes, I have some very kind friends! 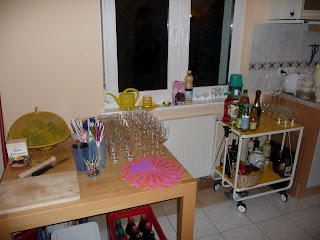 In the Third Room, I set up the dessert buffet. The Cold Dog (you can find the recipe for that under the label "Recipes" here on my blog) and the (savoury, not sweet) pastry bits were also made by my Mum - she spent hours and hours in the kitchen for my sake! The Tiramisu is the only edible contribution I made to the whole evening... that recipe is also here on my blog, if you are interested. 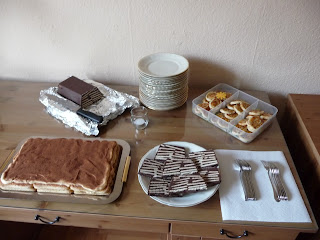 When I had finished, it was time to get dressed. I had been in two minds (actually, in three or four) about which dress to wear, and in the end went for this one:

From just before 7.00 pm onwards, the guests arrived. Instead of the 17 (+ myself = 18), there were only 12 of us in the end, but it was still a great party, and it only meant that there was more left of the food and drinks. 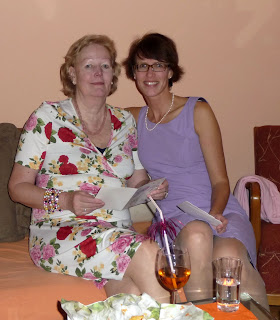 People brought such beautiful flowers and great presents, and we all had fun, plenty to eat and drink (well, not THAT plenty - most of my guests were driving, and/or working the next day), lots to talk and laugh about; in short: it was a great party! I wish I could show you the lovely dresses the female guests were wearing; one of my friends wore the exact copy of a 50s cocktail dress, and the men were all looking very smart, too. 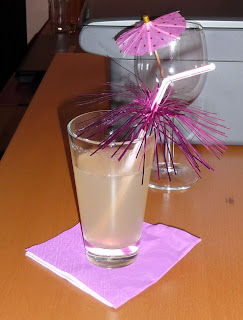 The drink I preferred for most of the evening: Vodka Cooler, consisting of Vodka (surprise!), sugar syrup, lime juice, ginger ale and ice. 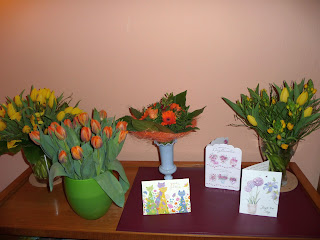 At about midnight, the last ones left; RJ and I filled the dishwasher and cleared up most of the party "mess", and at 1.15 am it was lights out at the Librarian's home. 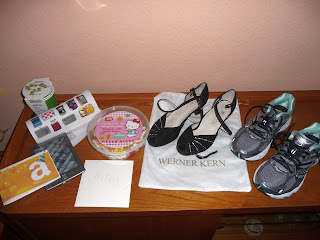 All my presents are wonderful and generous! The dancing shoes RJ gave me (I wore them to the ball already), the running shoes and the kindle from my parents, gift coupons for Amazon, for a massage or some other treatment at the nearby spa, for a cover for my kindle, the sweets, the seeds to grow kitchen herbs, not to mention the contributions in the shape of food and drinks (my sister paid for the vodka and the rum).


It was a party I much enjoyed, from the preparation to the clearing up afterwards, and I am determined to have another party soon - it does not necessarily have to be my birthday, does it?

PS: I have now added the picture of my Mum and I, upon her permission :-)
Posted by Librarian at 18:22