Some of you know that I am rarely to be found in the kitchen; cooking and baking are none of my hobbies. But I do like my food, and there are a few things I can make which always turn out really well.

One of those is Tirami Su, and I have made one today for tomorrow's New Year's Day dinner at a friend's house.
The recipe is my ex-sister-in-law's; sometimes it does pay off that I used to be part of a Sicilian family for ten years!
Tirami Su is a dessert liked by almost everyone. It is very easy to make, but because it needs to sit in the fridge over night, you can not use it as a last-minute thing for a spontaneous invitation.


Right, shall we get started?

What you need:
An oblong plate or tray to put the Tirami Su on; a sip or two or amaretto, cocoa powder (real one, please; unsweetened), 200 g sugar, 500 g mascarpone, 3 eggs (I know - there are 6 on the picture, never mind that!), and the bisquits. 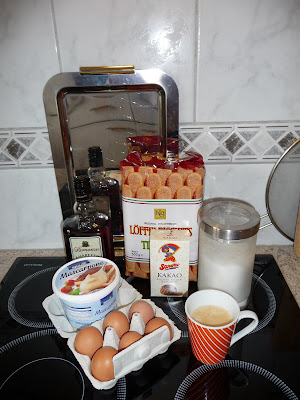 First things first - make a cup of espresso or very strong coffee; do not sweeten it. If you do not own an espresso machine or a proper coffee machine, you can make do with instant coffee - just make sure it is really strong. And, of course, for the real thing, real espresso is obligatory :-)


Spread the bisquits in one even layer on the plate or tray. They should be firmly in place and not able to slide about. 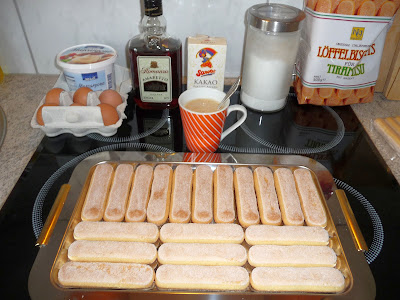 Add a sip or two of amaretto to the coffee. Consider who is going to eat the Tirami Su; if there are children, go easy on the amaretto, and in case you have to totally avoid alcohol for yourself or your guests, simply go without (it won't have the real Tirami Su taste then, but it will still be a very nice dessert).


With a teaspoon, put some of the amaretto-coffee-mixture on the bisquits. One spoonful on each bisquit is plenty; you do not want to drown the poor little bisquits, do you? 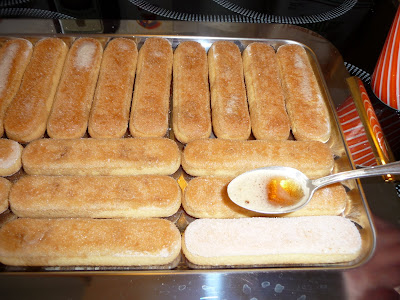 Now get a large bowl and measure 200 g sugar in it. 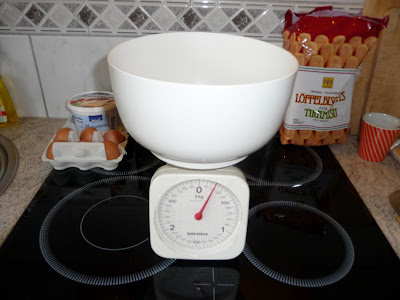 Add the mascarpone and the egg yolks; put the egg whites in a separate bowl. 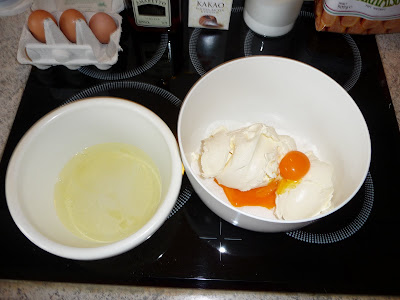 A word of advice: Please do not be tight with the sugar! I know some people who regularly use only half of the sugar stated in cake or dessert recipes, because they are counting calories. But - Tirami Su is fattening, and it is supposed to be sweet! That's what a dessert is for, isn't it?
No-one will like a Tirami Su that tastes more of cheese (mascarpone) or of the bitter coffee and amaretto than what it should be like - creamy and sweet.
Beat the egg whites until stiff (in German, this is called egg snow - I don't know whether that is a proper expression in English, but I find it quite fitting), and mix the sugar-mascarpone-egg yolk well until it is smooth.


Put the egg snow on top of the mascarpone cream. Take a large spoon (NOT an electric mixer this time!) and gently mix the egg snow into the mascarpone cream. Do not go hasty about this; if you stir too fast, the fluffy egg snow will go liquid and the whole cream will become too runny. When you're done, it should all be one colour without any white discernible, but it should look more like a fluff than a cream. 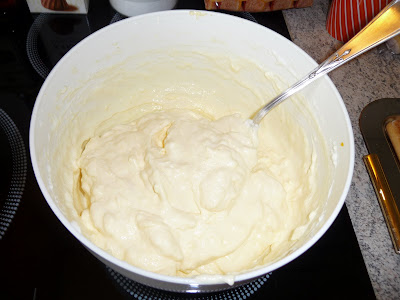 Get the tray with the bisquits and distribute half of the cream on top. If you put big blobs of cream there at regular intervals, it will be a lot easier to spread it evenly. Use the back of a large spoon or a broad cake knife or something like that. 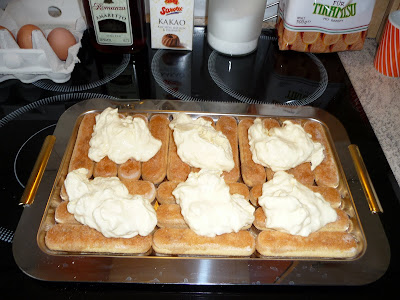 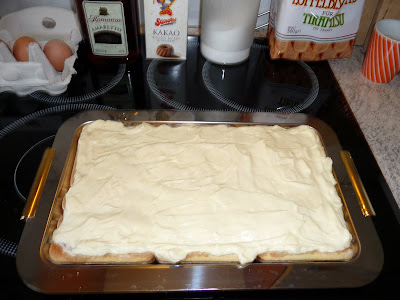 Done?
Right, put the next layer of bisquits on top of the cream. Do not press them on, simply place them there. Make sure they lay right on top of the first layer, it will make cutting and serving easier, apart from looking a lot nicer. 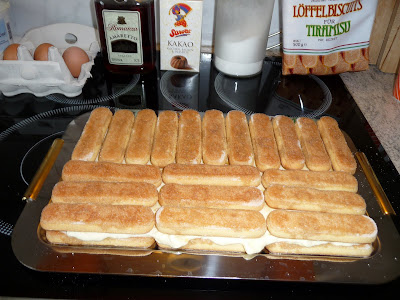 Again, put coffee-amaretto-mixture on the bisquits, and then the rest of the mascarpone cream. 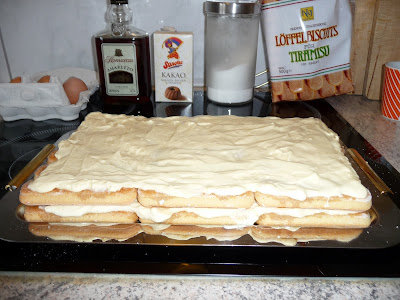 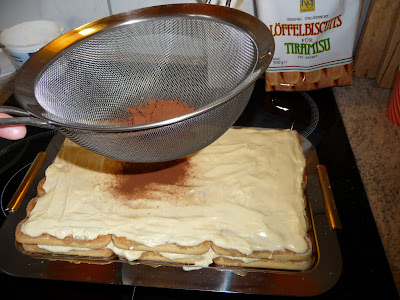 Put a bit of cocoa powder in a sieve, and dust the Tirami Su with it. 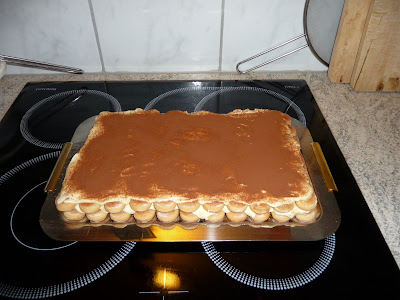 It is now ready to go in the fridge and sit there until tomorrow!
Let me know how you and your guests liked it :-)
Posted by Librarian at 15:07