Notes To Self III

Many thoughts about possible blog entries have been (and still are) floating about in my mind recently, but none of them is ripe yet to be put into written form.

Instead, several notes to myself are waiting to be on here, if you are still interested. 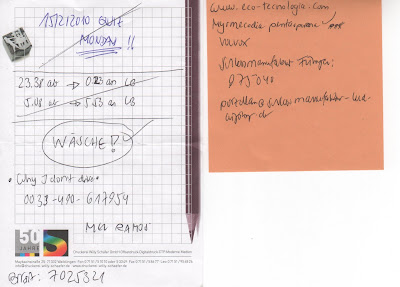 Starting on the top right corner of the white note, it gives you an idea of how long this has been around - I was planning to go to the pub quiz at my local on Monday, 15th of February. The emphasis was on MONDAY because usually, quiz night is Tuesdays.
Sadly, nobody was willing to go with me, and it is not much fun on my own.


The following are train times, referring to how I was possibly going to get home after meeting a close friend who I had not seen in more than a year and who finally happened to be in my area again. Since the last train from where we met would have left at 11.38 pm, that would have given us only about 2 hours together - too short when it is someone you care about and who you hardly ever get to see. The next train after that would have been at 5.08 the next morning - so in the end, it was a taxi that took me home somewhere in between those impossible train times.


"WÄSCHE", the word I have circled, means washing in German, and its only reason there was to remind me to take the washing out of the machine before leaving for work; I don't like my clothes to be crumpled beyond recognition when they stay in there for too long.


"Why I don't drive" was, as my dear elite few readers may remember, the title of a relatively recent blog entry. I did not want to forget writing it and so it ended up on this note.


The phone number is my aunt's in the Provence (Southern France). Of course it is not the full number; although I trust my readers here and am not much worried about anyone "strange" reading my blog and misusing the number, there is such a thing as data protection.


My aunt is providing her flat in Nice (Nizza) on the Côte d'Azur for me, my sister and two friends; we are taking the plane there this coming Sunday and will be back end of next week. It is a holiday I am very, very much looking forward to - not only because temperatures there will be a lot nicer than what we have to endure here at the moment, but also because I am convinced that a change of scene, even if only for a short time, will do me good.


Below that number you can (maybe) decipher a name: Mel Ramos.
He is an artist whose work I have known for a very long time without knowing his name. An art gallery not too far from where I live is currently showing his works; the exhibition is open until mid-April, and I do hope to find the time and occasion to go and see it.


At the bottom of the note there is another phone number. This is a friend of my sister's who has the idea of cooperating with her Italian language teacher to organize a monthly wine tasting (in Italian, with Italian wines) in her cellar, and she wants me to moderate the event (I am fluent in Italian and am used to moderate small scale events, so I understand why she wants me to do it).
So far, I have not been in touch with her about it, but I guess I will.
The first line on the yellow note is easily recognizable as the link to a website. If you want to have a look at http://www.eco-tecnologia.com/, you will find that it is about a building project: Houses, water reservoirs and other structures built using PET bottles and rubble, drawing on the local community for the actual work, thus enabling those who otherwise would not be able to afford a house worth the name to live in a their own home, at the same time doing something positive for the environment and the community they live in.
The man behind the idea is Andreas Froese, a 53-year-old German who has been working in South America since the 80s. In 2001, he founded ECO-TEC, and the company have since realized more than 50 projects in third world countries and poor communities.
If there is anything in abundance in those areas, it is rubbish, and a lot of that rubbish are PET bottles.
So, why not use what is there?
This is how it works:
empty PET bottles are filled with rubble and then used as building bricks. The finished walls can be painted in any colour the inhabitants like, and there is another big advantage apart from the building materials being cheap and easy to find: the finished structure withstands earthquakes a lot better than a concrete wall.
Another positive side effect is what happens in the community. The local people have reasons to cooperate, they learn new skills, they have a tangible result of their manual labor, and sometimes young people who have started out by helping filling the empty bottles with rubble have gone on to learn the trade of carpenter or builder, thus having a better perspective for their own future and that of their families.
(Sorry, this was a bit long. But I am truly impressed by the whole idea and the spirit behind it and think it deserves attention.)
Next is the name of a plant, Myrmecodia pentasperma. The little "thing" next to the word is supposed to be an ant - to help me remind what Myrmecodia pentasperma is: a plant which provides ready-made "houses" for ants, thus forming a symbiosis with those specific ants. I came across it in the book "Climbing Mount Improbable" by Richard Dawkins, which I highly recommend to anyone who likes a good science book with its own entertaining value.

Volvox is a multi-cellular organism and was mentioned in the same book. I have yet to investigate this particular kind of organism further.


The second half of the yellow note is the contact details for the porcellain manufacture in my hometown's castle; they provide guided tours for groups, and I am probably going to organise one. You can get an impression of what they do here: www.schlossmanufaktur-ludwigsburg.de.


That's it for today - and I think I have just broken my personal record of longest blog entry!