How different is the Catania of 2010 from the Catania of 1987, the year this blog entry is set in? Really, I don't know; the last time I set foot on Sicily was in 1998.
But I guess the places I am going to mention are still there, pretty much the same as they were back when my friend Brigitte and I explored this big, bustling city at the foot of the Etna. 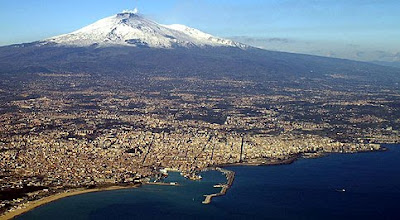 When I say "bustling", I mean it - as my first and most lasting impression of Catania is the traffic. There are not only the big orange buses and an incredible number of cars, but also motorini weaving in and out of the lines as well as the odd lapita (a small three-wheeled car, still widely in use all over Southern Italy) - no bikes, though, at least not enough for me to remember them. 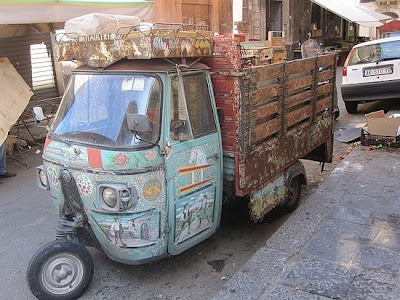 Out of a four lane ringroad, the average Catanese driver has no trouble to create eight lanes; traffic lights are a mere suggestion. But because everybody drives like that, surprisingly few accidents happen; it just adds up to a very high noise level, not to speak of air pollution.
Though how much of the black dust I see in the sink in the evening when I wash my hair is volcanic dust from the Etna, and how much of it comes from the cars, I can't tell.


Brigitte and I want to do some proper sightseeing in Catania, and because the place is really too big to walk it all (even for someone like me who is used to a lot of walking), we take one of the big orange buses. I find the bus fare extremely cheap, but then again, I come from one of the most expensive areas of South Germany where public transport is concerned.


The exact order of sights we visit as well as the number of days we actually spend in Catania is a bit muddled after 23 years, but the general atmosphere is still very much present in my mind.


The Etna is not very far, and just like in Palermo, a lot of lava was used as building materials, for pavement slabs and so on.
Catania's most famous piece of lava rock is undoubtedly the elephant: 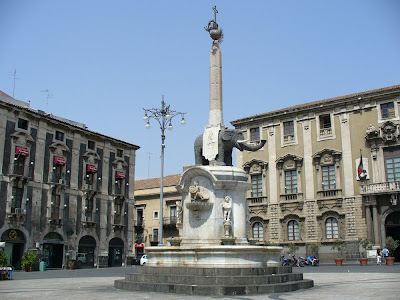 It is ancient - in fact, the obelisk on the elephant's back is a genuine ancient Egyptian one, bearing inscriptions honouring the goddess Isis - and possibly of Byzantine origin, but nobody seems to be quite sure about its true age or meaning, which does not stop people from making up a number of theories, some quite plausible, others less so. The cross on top of the obelisk is dedicated to Saint Agatha, while the elephant itself is said to symbolize strength and longevity, attributes the people of Catania like to claim as typical Catanese.


Do you remember my blog entry about "Stupor Mundi", my old friend Federico II ?
Well, he has left his mark in Catania as well, not just in Palermo, most notably in the shape of the rather forbidding Castell'Ursino, which, to my big disappointment, is closed for visitors when we arrive there. 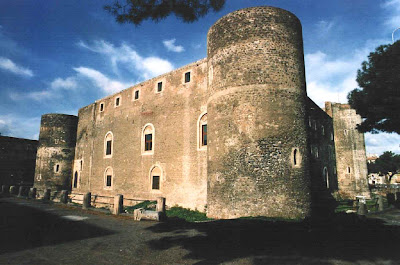 October can hardly be called the tourist season on the island, and so Brigitte and I only get to see the castle (which was begun in the year 1239) from outside.


A stroll in the park is a rather welcome break from the noise and traffic, and Villa Bellini is where we go. 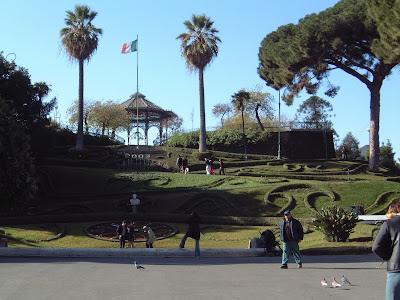 It was opened in 1883 in honour of a famous son of the city: Vincenzo Bellini, composer of operas such as La sonnambula and Norma.


After a day of sightseeing and travelling by bus and on foot, we are glad to get back to the flat where the third girl (sorry, still can't think of her name) insists on cooking for us, in spite of Brigitte telling her that we can really rustle up something for ourselves. I must admit I am glad that it is not me who has to use the gas cooker; being used to electric kitchen stoves only, I have the utmost respect for gas.


When Anna comes home from work, we tell her where we've been and what we have seen; later, Maria-Pia comes home as well, and announces not only that she will be hosting a party tomorrow evening, but also has a suggestion for me.


More about that in my next blog entry :-)
(Credits for the pictures go to the people who have put them online originally - not to me.)
Posted by Librarian at 21:25