Your Very Own Time Machine

Almost everyone - except for some poor individuals who have had an accident or other medical issues - possesses their very own in-built time machine. 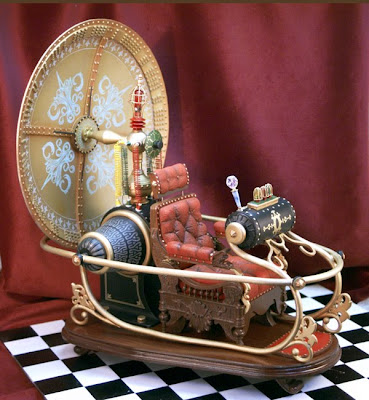 It has nothing in common with any of the famous devices pictured in books and films, like the original one from the 1895 novel by H.G. Wells, or the De Lorean DMC-12 used by Marty McFly and "Doc" Emmet Brown in "Back To The Future" (which was released in 1985 - something for the numerologists among you to think about). 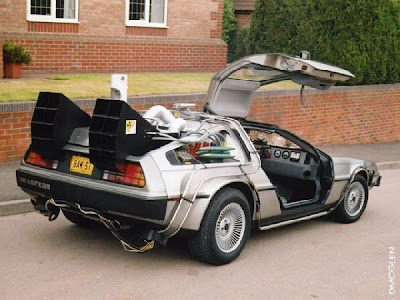 It is our olfactory sense, one of the most ancient (in evolutionary terms) and important senses any animal on this planet, ourselves included, has at their disposition.

Of course, the olfactory time machine has a limited reach of those comparatively few years of life we can each look back on individually. It can not take you to, say, Ancient Egypt just as it can not show you what life will be like on Earth in 100 years (or even the next hour, for that matter).

But it can send you in an instant through time and space, and it is very powerful.

I assume each of you who read this blog associate certain songs with certain events; there was that song they used to play on the radio all the time when you were doing that summer job at the petrol station, or the one that made you get up and dance every night at the beach disco during that holiday, and probably more than one of us know songs that we attribute to specific people.
There is a whole set of club favourites from the mid-eighties which will forever remind me of a boy who was part of our extended clique and who I had a crush on, with him barely knowing that I exist (yes, Ralf Bauer, it is you I am talking about. I can safely mention your name here as neither you nor anyone who knows you is ever going to read this anyway, right?).

So, yes, songs can act as time machines as well, as can other sounds.
For me, ever since the night I came home from work and found my husband dead on the floor in the living room, the sound of an ambulance causes me some distress. Other sounds, like the buzzard's cry, evoke in me a longing for something I still do not fully understand. Some pieces of music can even move cold-blooded lizardy Me to tears.

And yet, scents have a different power, it seems.

Last week, I was in the Provence (South France) for a short holiday, a family gathering actually.
Due to the number of people, my sister, my father and I were staying not at one of our relatives' places, but at a small hotel, an ancient house with five of its rooms having been converted into guest rooms.
To reach our rooms, we had to cross our host's kitchen, their study, a tiny walled courtyard with an old wall fountain, and then climb up a set of ancient, uneven stone steps in a rather grand-looking staircase. 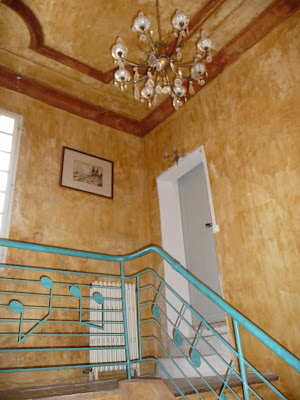 I opened the big dark wooden door to the staircase for the first time and WHAM! was instantly taken back to Mirabella Imbaccari and the house of my ex-parents-in-law, where I spent many summers while I was still part of the Sicilian family that gave me their surname for eleven years.

It was a very characteristic scent, not uncommon to old houses; a mixture of deep, damp stone cellars and the beeswax used to polish the wooden doors, and for those who are familiar with it, sand can be detected as well. On Sicily, the sand in the air is carried with the wind from the Sahara, collecting in a small heap inside the closed doors where no-one sets a foot for most of the year, until summer, when people return to their home village for a month or two and their hibernating houses come alive again. There in the Provence, I can only assume that the sandy smell comes from the ochre dust which lays on the landscape, as a large part of the ground around there is ochre.

The last time I was in Mirabella was in 1998. I have not been that far South since then; all the holidays after 1998 were spent elsewhere, such as Florida (1999), England and Germany.
My nostrils had not come across this particular mixture of scents for 12 years, either, and therefore you can maybe imagine what a strange and unexpected experience that little time-travelling was.

After the initial mild shock at finding myself so suddenly in a place I thought I'd never see (or smell) again, I began looking forward to opening that big wooden door every time we came back to our hotel. Every time, I took the scent in with deep breaths, enjoying the knowledge that, although I was able to picture quite well the person I was back then, the people I dealt with and the places I went to, I have come a long way since, with no need and no motivation to go back.

Human memory is fragmentary and not very reliable, as everyone who has ever been involved with a police investigation knows. But those things we do remember, even if they are less than accurate, form part of our present character, and to rediscover them from time to time through a bit of time-travelling can be anything from fun to eye-opening, and sometimes both.

So, next time you happen to stumble across your very own time machine, use it, and use it well.

(The pictures of the time machine and the Delorean are from elsewhere on the internet, not mine. The staircase picture is my own. You can have a look at the hotel's website here: http://www.lasarrasine.net/index_uk.html )
Posted by Librarian at 21:19