In July, I wrote about everyone's personal time machine, and the kind of time-travel described there is quite spontaneous and not really organized in any way.
But there is a more "all inclusive" way to travel into your past: Go where you've lived as a child.
And that is just what I've done on Tuesday.

When I was five, six years old, my parents, my sister and I used to live in a small village near the river Rhine, close to the French border. Both my sister and I attended kindergarden there, until my sister (being one year my senior) started school. 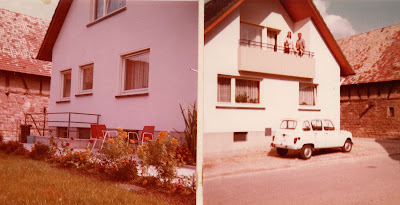 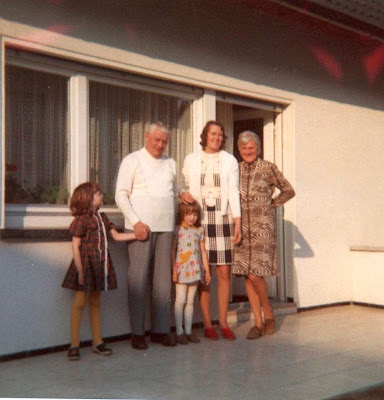 (Back & front view of the house we had rented; on the patio, left to right: my sister, grandpa, 5-year-old me, mum, grandma)


It was a good time for us, the way life in the country is for children: little road traffic to worry about, lots of animals to visit on the farms who belonged to our friends' parents, people knowing each other so that practically everyone kept an eye on the kids running around outside without the parents constantly having to monitor their offspring. 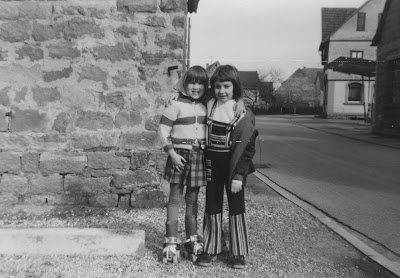 5-year-old future librarian with one of my kindergarden friends, Tanja (not the one I met again on Tuesday; I do not seem to have any picture showing the two of us back then).


For my parents, things weren't easy, mostly in economical terms, which was the reason for us eventually moving back into town (where we all still live).
Regardless (or because of?) their difficulties, they formed lasting friendships there, particularly with one family, and on Tuesday, we went on the roughly two-hour drive to the village to visit those old friends.

Of course, the village has grown and changed, but some bits there are exactly as I remembered them: the old house on the corner of the road where we used to live, the many orchards and gardens and fields on the village's outer rim, and the church as well as many of the older houses dotted around it.

I enjoyed seeing my parents' friends, and especially their daughter who is my age; we used to be pretty close as kids, but as life moves on and people (in that case, my family) move away, we lost touch.

When on Tuesday I saw her again for the first time in about 25 years, it was almost as if we'd never been apart for longer than a few years - she still has the same laugh, her face and looks have not changed beyond recognition, and it was really really good to see her.
After we had been talking over coffee and cake for quite a while, she suddenly reached into the pocket of her trousers and showed me three letters she had kept all those years: my sister and I had written them to her about 1 1/2 years after we had moved away from the village, in 1975, when I was seven and my sister was eight.

It was very touching to see that she had kept the letters for so long, and funny to re-read them; they reminded me of what mattered to us back then, what we found worth writing about (mainly our guinea pigs having had babies, but also school holidays and other things).
My handwriting was really neat back then, believe it or not!!

Later, we went to the river where we'd spent a lot of time back then, and there, the smell of the water on the pebbles added that time-travelling component I wrote about earlier. No two rivers smell the same, and the Rhine is very different from the Neckar which is the river closest to where I live now. 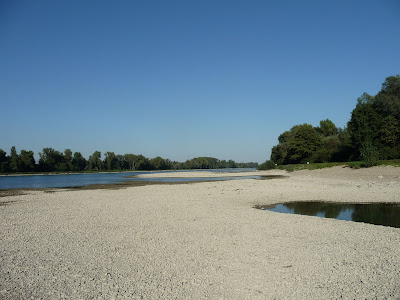 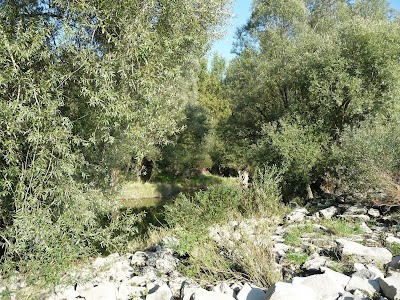 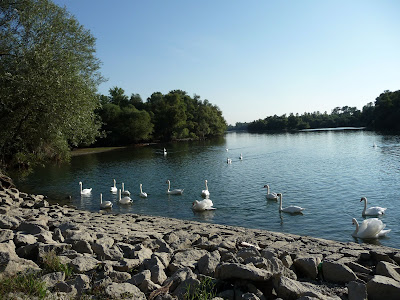 We took a look at the small lake on which I learnt ice skating during that one winter when it was frozen solid while we lived there, and I got a gnat bite as soon as I stepped out of the car; well, I needed a souvenir, didn't I! 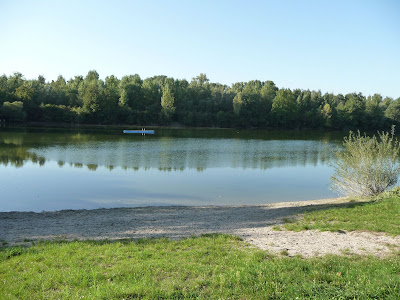 It was a day I really enjoyed. Some of my friends tell me they don't do nostalgia and do not want to remember their teenage years or childhood, but I had a great time as a kid, something I will always be grateful for to my parents.
Posted by Librarian at 17:32