My lunch break has to be at least 30 minutes long; this is a rule not made up by my bosses, but, I understand, by the government, stating that if you work six hours or more, you have to get the chance for a 30 minute break. Going against this rule would lead to problems with the insurance if, for instance, someone driving their car on the way home from work had an accident and it would come out that they did not take the required break.


Don't worry, I am not going to bore you silly with any more excursions into the fascinating world of rules and regulations for the working, but if you have been reading my blog every now and then, you may have noticed that I like patterns and symmetry, and therefore the fact that I had three encounters during my lunch break of 30 minutes finds mention here.

It was on Wednesday when, as almost always, I took the leafy path leading along the railway and towards the small town's centre, where I get my staple lunch, ciabatta with mozzarella and tomato. 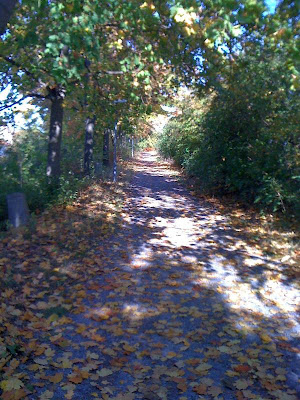 The path, but on a different day when, obviously, it was not raining.

Coming towards me was a little old woman, anorak-clad (it was raining) and wearing sensible shoes and warm trousers. The hair showing from underneath her anorak's hood was of a very bright, vivid red, the kind that can only come from a bottle - tomato-red, really. The little old woman nodded at me, and smiled, and when I smiled back, her smile went even broader, and she nodded once more. If I am not very much mistaken, I heard her giggle when she was past me. What she found so enjoyable about her walk in the cold rain I do not know, but it was nice to see that there are some little old (maybe slightly mad) women about who do not, like so many other people, go miserably about their daily business.

Once I was past the railway bridge where strong winds tried to nick my umbrella or, seeing that I was unwilling to relent and give up this highly treasured possession of mine, blow me from the bridge and on to the rail track, I was pushed round the corner where the nursery school is and there, on the narrow path seperated in the middle by a fat white line into a cycle path and a foot path, a red squirrel was bouncing about. 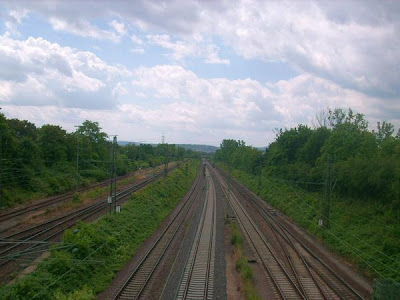 View from said bridge, again, on a different day when it was not raining.
It stopped in its tracks when it saw me, then hurried a bit further up the path and into the shrubbery on the side, where it stopped on the thick layer of yellow leaves accumulated on the ground, and looked at me in what I presume was mild curiosity as to whether I was going to come too close for comfort.
Obviously I must have done, for the red squirrel decided to climb the nearest tree, and disappeared from my view.
The glass door to the bakery was open, as it is almost all year round except for when temperatures reach below freezing, and I went in, shaking the water off my umbrella.
One ciabatta with mozzarella and tomato was left, and without me having to say anything, the lady behind the counter who is as wide as she is tall (not the counter, the lady) waddled to that end of the counter where the sandwiches are kept, put the ciabatta into a yellow paper bag and handed it to me, saying that it had obviously been waiting for me.
She was in a very chatty mood, and as there were no other customers in the shop waiting to be served, I spent a few minutes listening to her plans for her own lunch (Quiche Lorraine) and for the afternoon (big meeting at the seat of the central administration of that chain of bakery shops). We exchanged a few more pleasantries, and then I walked back to where I work.

This time, I met neither squirrel nor mad old woman.
But it was thirty minutes well spent, and I was ready to tackle the afternoon's tasks.
Posted by Librarian at 18:55