Notes to Self IV

Goodness! Is it really so long ago since I last posted a Notes to Self blog? That was back in March... with most (and the best!) of this year still ahead of me.

Not having mentioned it here since March does, of course, not mean I have not taken any notes in order to support the not very impressive capacity of my mind to remember things; I often use my mobile phone's "notes" feature instead of bits of paper, especially when travelling, which is what I have done to quite an extent this year. 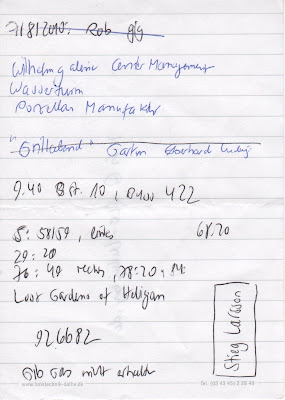 This leaf from a notepad starts with "7/8/2010 Rob gig".
Rob is my late husband's cousin in England who plays in a band; before I went over to see the family in early August, he had told me when he was going to play next and the original plan was that my sister and I would accompany him and watch the gig. For various reasons, this did not come about, and so to this day I have not seen Rob play live.
In case you are interested, here is his website: http://fishertyasmusic.com/

Next are three ideas my co-moderators and I have come up with for possible guided "behind the scenes" tours for our local XING group (see http://www.xing.com/ if you are not familiar with it; XING is a social network mainly for business, but there is a huge number of groups such as local ones, or for specific areas of business or interests). We are working on getting such tours for the group at our inner-city shopping mall, the water reservoir and the porcellain manufacture here in town. The tours we have had so far were all hugely popular with many more members interested than what was possible.

The line "Grillabend" Garten Eberhard Ludwig refers to an event for the XING group we organised in June; it was an Italian buffet-style dinner in the beautiful rose garden at the restaurant where we usually meet once a month. The food was excellent, the company good fun and the conversation interesting - a success from all aspects.

Where it says 9.40, Bst.10, Bus 422, that refers to the day before I had to go to hospital for my operation. I was expected there for the pre-operation procedures (mainly of an administrative nature) at 10.00 in the morning, and to make sure I'd be there in time, I checked the online bus schedule; also to find out which stop at the central bus station would be the right one.

Some rather cryptic numbers follow; these mean minutes and seconds on the archived video of a television program I watched a few weeks ago. It was a studio discussion about a current topic in my area, and I actually only watched it because a friend of mine had told me he was going to be in the studio as a spectator, but if the moderator was going to ask the spectators' opinion, he was prepared to say his bit. My friend was not asked, but the times I wrote down were when he was clearly visible, and I originally wanted to show him to my mother (you are welcome to draw your own conclusions from that) but in the end didn't; other things gained more importance.

"Lost Gardens of Heligan" is the next line.
Now, I guess some of you know about these gardens and possibly have even been there.
While I was in hospital, I read "The Forgotten Garden" by Kate Morton - it was just the right kind of book at that time; not too demanding, but entertaining the mind enough to make my stay in hospital nicer. When I was back home, I went to check out the author's website and found the Lost Gardens of Heligan mentioned there, which lead me to check out that website, too.
Since then, I have heard from a friend who has been there that there are gardens to see that are much more beautiful and less overrun by visitors, but still, I think it looks like a great place for a day out.

You guessed it - the number 926682 is a phone number; that of my doctor who I called several times during the two weeks I was home after the operation and before I went back to work on Monday.

The next line refers to an item I was supposed to receive by mail but which was lost; I needed to remind myself to ask the sender to send it once more.

The name in the square is that of an author; Stieg Larsson was recommended to me by a friend who had read the trilogy during his holiday. I have almost finished the first in the series. Of course, there is a website for Mr. Larsson, too.


Now that I have finished writing this, I think it is time for the next installment in my "Souvenirs from Sicily" series. Would you like to read it?
Posted by Librarian at 21:38