Today, I want to show you the view I had from my hotel room in Salzburg, Austria, on Wednesday morning. Don't ask me the name of the mountain - Salzburg is surrounded by similarly dramatic and beautiful formations on all sides, but I am not very good at the geography of the place, I'm afraid. 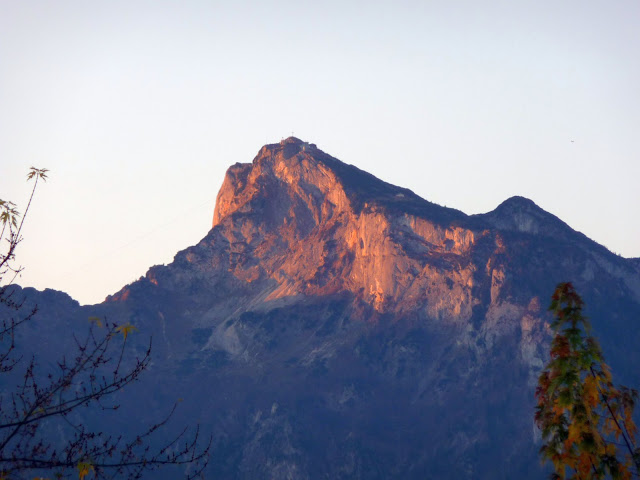 Salzburg was a business trip; the biggest fair for the gastronomical and hotel industry was held there, and since I provide the point of sale hardware everyone who runs a hotel or restaurant, pub, coffee bar, night club etc. needs, and several of my customers were exhibiting at the fair, I took the train to Austria on Tuesday afternoon and spent Wednesday at the fair.

My hotel room was nice, surprisingly spacious, very clean and I liked the striped curtains (while I do not have any curtains anywhere in my home, I do like them in other people's places). 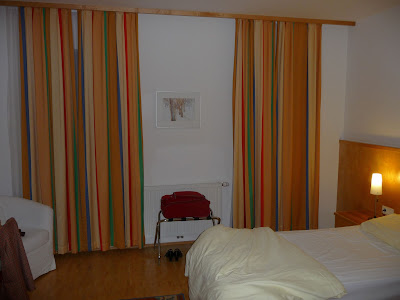 Something about the rug in my room struck me as odd, and then I realized what it was: among the usual camels, hyenas, llamas and other desert motifs, there was what can only represent a Rubik's cube - see for yourself! Do you remember them from the 1980s? 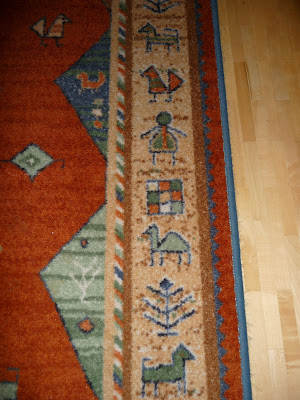 A cross on the wall is something you'll only find in Bavarian or Austrian hotel rooms (Italy and Spain, too, I guess); I don't think I have seen one anywhere else, and I have seen my fair share of hotel rooms in various parts of Germany. 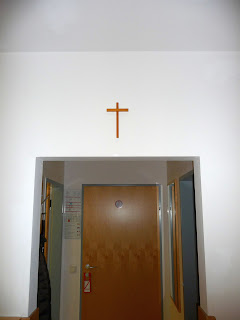 As mentioned, the fair is all about what people in a restaurant or hotel could ever possibly need, from hair dryers to table cloths to huge industrial dishwashers to scents for the air condition to special pillows for people with back problems to the aprons waiters wear to china and cutlery to hotel room keys and security systems to napkins to lighting to steam cookers to furniture to cakes and meats and pasta and sauces and and and... the list is long, the halls were large and brimming with people and booths, and I had a good time. Anytime I felt a bit hungry, I simply went to one of the stalls where some cooking show or other was going on, patiently listened and watched through the presentation and then had a sample of what they had just made, from burgers to ice cream, it was all there. And of course there were the manufacturers of coffee machines and the companies who roast and sell coffee beans and other coffee products - so, no shortage of that all day, either! 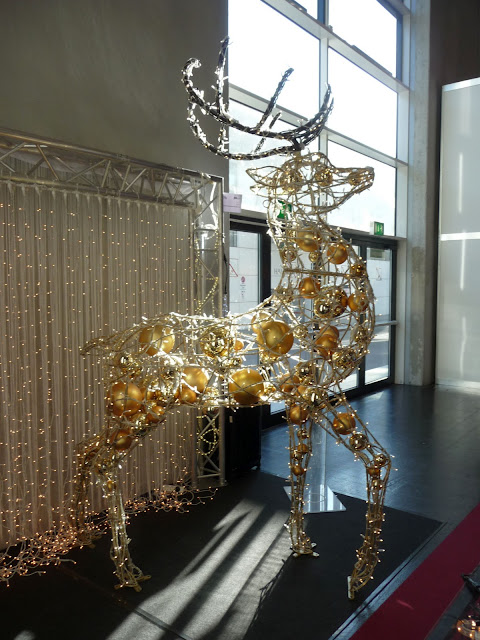 This huge stag (about twice as tall as I) was quite an eyecatcher in one of the halls. I think it is very kitschy - but so kitschy it is cool! I asked the lady at the booth whether it was OK if I took a picture, and she had nothing against it. There; some Christmassy glamour, posted less than two weeks before the Christmas market in my home town begins!
Posted by Librarian at 10:34