Again, I am amazed at how long it takes me these days to finish a book; there used to be times when I devoured several books in one single weekend (if it was rainy and cold, that is), but now, there always seems to be so much else that I want to do, see, read (in my weekly paper or elsewhere), listen to, and so many places I want to go to and people I want to meet, that it took me more than a month to finish my latest read, kindly lent to me by my sister: "Of Human Bondage" by W. Somerset Maugham. 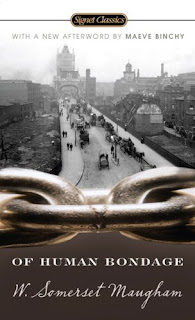 My reading is not ambitious at all, I have never aimed for the intellectual, and although I was really trained as a Librarian in my long-ago youth and loved working at the library, you'd be surprised at the number of classics that are considered to be "must-reads" in the world of literature that I have NOT read. But every now and then, I come across one, and this can certainly be said about "Of Human Bondage".

It was a book I enjoyed very much and can recommend to anyone. The story is said to be semi-autobiographical, and Mr. Maugham wrote it in two parts; he did a first draft when he was in his early 20s (which was in the late 1800s-early 1900s), but only took the manuscript up again and turned it into the masterpiece we know now 15 years later, with the first edition having been published in 1915.

Philip Carey is the main character, and it is his life we follow from when he is a boy of about 9 years until he is almost 30. There are many tragic events in Philip's life, starting with the early death of both his parents, events he can not control, while at other times, he takes decisions the reader wants to shout at him for, shake him and tell him, 'don't do that!', but such is life, isn't it? People do not always act the way they should, and it is always easier to see it from an outsider's perspective as when you are in the middle of things yourself.

Philip is essentially a very good person with a kind heart, and he does not judge others - he largely accepts them the way they are, and still helps them over and over again, even though they have hurt him greatly and actually do not deserve his friendship and support. He can also be nasty and come across as arrogant if he wants to, and in that, once again, he is very much like a real person. His life does not follow the strict moral codex of his time, and yet he is maybe, in some ways, a better person than those of his contemporaries who think of themselves as good Christians. For that, too, one can't help but like him.

What really makes this book such an excellent read is the language used. Every now and then, I had to look up a word I didn't know, and that does not happen very often, probably because I do not frequently read books written in that era.

Parts of the book reminded me of Emile Zola's "The Ladies' Paradise", which I read a few years ago (in German, I'm afraid; my French would never suffice to read the original "Au Bonheur des Dames".)

There is such a lot in it I would like to share with you, but instead of making this an endless post, let me just quote a few bits that I found particularly impressive, for one reason or other:

In his late teens, Philip spends a year in Germany, studying in Heidelberg. The owner of the boarding house has strong opinions about literature and the theatre:

It was the period in Germany of Goethe's highest fame. ... he had been adopted as the national poet, and seemed since the war of seventy to be one of the most significant glories of national unity. ... Professor Erlin, who hated the Prussians, gave his enthusiastic admiration to Goethe because his works, Olympian and sedate, offered the only refuge for a sane mind against the onslaughts of the present generation.

The Professor calls Henrik Ibsen's "A Doll's House" obscene nonsense and "nothing but filth", and would rather have his daughters lying dead at his feet than see them listening to the garbage of that shameless fellow. Of Richard Wagner, he speaks with good-humoured laughter, calling him a charlatan with something for the comic spirit to recjoice in. He says:

"I tell you young people that before the nineteenth century is out Wagner will be as dead as mutton. Wagner! I would give all his works for one opera by Donizetti."

Well, Wagner remains very popular (and not just in Germany, I believe), although he has never been quite my thing; when it comes to the opera, Verdi is and will always be The Master for me.

Eventually, Philip wants to end his time in Heidelberg:

"You know, I don't think I can stay here much longer. I want to get to London so that I can really begin. I want to have experiences, I'm so tired of preparing for life: I want to live it now."

Just like in the early chapters when Philip is still a child, the way he feels and thinks is shown convincingly real as that of a child or, as in this instant, as a teenager eager to embark on life as an adult. I do remember that, in my teens, I had that feeling of a long wait, too; I didn't really know what I was actually waiting for, but I suppose it was "life".

After a short stint in London, Philip takes up studying art in Paris. He learns a lot there; among other things, he finds out that he will never be a brilliant artist:

He painted with the brain, and he could not help knowing that the only painting worth anything was done with the heart.

Back in London, he meets up with an old friend from his Heidelberg times, and they talk about beauty:

"In themselves there is nothing to choose between the Campanile of Giotto and a factory chimney. And then beautiful things grow rich with the emotion that they have aroused in succeeding generations. That is why old things are more beautiful than modern. The Ode to a Grecian Urn is more lovely now than when it was written, because for a hundred years lovers have read it and the sick at heart have taken comfort in its lines."

Rather late, Philip finally makes true friends; there is a family with nine children, and there, for the first time, he encounters a real family life, something he has - more or less unconsciously - been longing for ever since his boyhood. The head of the family is very much into anything Spanish, and tells him:

"You should read Spanish, it is a noble tongue. It has not the mellifluousness of Italian, but it has grandeur: it does not ripple like a brook in a garden, but it surges tumultuous like a mighty river in flood."

The friendly family provide an anchor of stability when Philip's life gets, once again, completely upset (by his own unfortunate decisions, I must say), and in the end it is that family who make it possible for him to change his life around once more, and the book ends with an optimistic outlook for him.

There is, as I said, a great deal more in this book than what I was able to convey here. It has been adapted into a film three times, but I have seen none of them and wonder if any of you have both read the book and seen one of the films, and how well adapted they are; please let me know if you can.

My next read will be non-fiction again.
Posted by Librarian at 08:29