In my previous post, I voiced my disappointment of a Kindle book about Michelle Obama, which turned out to be not a book, but a summary of her biography, nothing more than an extended article you would expect to find in a magazine (only without the pictures), and that I thought this too higly priced.

Well, that can certainly not be said about the book I finished reading last night: "A Fair Barbarian", by Frances Hodgson Burnett. 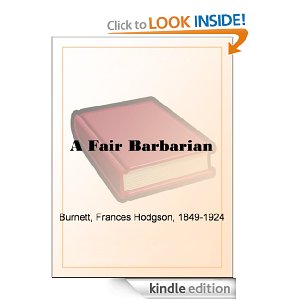 The Kindle edition is free, and since I have made it a habit to browse the free eBooks on the Kindle store website, I came across this one and did not have to think twice about downloading it. Until then, I only had known one book by this author; "The Secret Garden" (which I love!!), and of course I'd watched the film adaptations of her books "Little Lord Fountleroy" and "A Little Princess" (my first encounter with Shirley Temple) several times when I was a child.
My impression was, therefore, that Mrs. Burnett had written children's books only, but that is not true. A quick look at her wikipedia entry shows a long (and not exhaustive) list of books, published from 1877 to 1922, and by no means all of them were written for children. 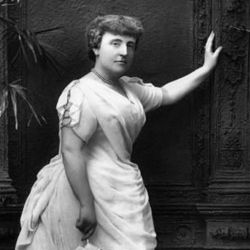 "A Fair Barbarian" was published in 1881, when the author was 32 years old. It is, I think, aimed at young ladies, and if you have ever read any of the highly entertaining Georgette Heyer novels, you will enjoy the "Fair Barbarian", which may well have served as an inspiration to that later author.

The setting of this book is Slowbridge, an English village which prides itself on the modesty of its young ladies - all dressed in white muslin gowns made by Miss Chickie, the village taylor, who adapts the more fashionable styles from London and Paris to the requirements of Slowbridge's strict rules about what is deemed decent attire for a lady. The whole village is, it seems, socially under one particular lady's authority; whoever she does not invite to her tea parties, is not invited by anyone else, but if she starts the round by inviting someone to her house, everyone else follows suit.

One of the lesser mortals living in the village, an elderly lady on her own, receives a surprise visit: her niece (whom she had not even known existed, let alone met before) arrives on her doorstep with five huge trunks, fresh from the US, and announces that she is here to stay - at least until her father, the elderly lady's brother (whom she has not set eyes on for many years) has successfully dealt with a business emergency back home and can join her in England.

This newcomer, Octavia Bassett, causes quite the metaphorical whirlwind in the quiet, modest village; her clothes (not the demure gowns of white muslin the other young ladies wear, but dresses that "fit like a glove", plus - imagine that! - diamonds dangling from her ears and on her fingers, in full daylight and without being married!), her hair style, her general demeanour and frank, open manner of speaking to anyone, regardless of their position in the social hierarchy of the village - all that is cause for plenty of gossip from the elderly generation and much admiration from the younger.

What changes in the villagers' hearts and minds Miss Octavia manages to bring about - without even consciously doing anything to achieve this - and a glimpse of what her and her new friends' future lives may look like, is told in a most entertaining manner; some bits are rather predictable, while others aren't, but even the predictable bit does not diminuish the pleasure of reading this charming story.

While writing this review, I looked up Frances Hodgson Burnett on Wikipedia and learnt a few things about her life, of which I had known nothing before. Because she had spent a lot of time in both her native England and the US, I believe her portrayal of the difference in customs and habits between the one country and the other in those days to be credible and not just added to the story as figments of her imagination to make the character of Octavia more interesting and in contrast to the English girls.

I shall definitely look for more of her work in Amazon's Kindle store.
Posted by Librarian at 19:02