Not that long ago, I read Frances Garrood's first novel, "Dead Ernest", and posted my review here.
In that post, I also mentioned her blog, which is well worth following.
Last night, I finished reading her second novel, "The Birds, the Bees and Other Secrets". 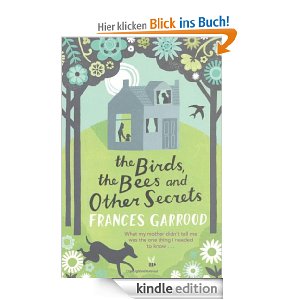 Both the story and the characters are very different from "Dead Ernest", but the two novels still have a lot in common: Both go back and forth in time, but in a rather systematic manner, so that the reader always knows where and when they are. Both are several stories woven into one, while never overloading the reader with such a multitude of characters and threads as to create confusion. Both have a very real feel to it, making me convinced Frances worked a lot of personal experience into her books. Both show a kind of down-to-earth humour that never ridicules anyone, but makes hardships somewhat easier to deal with.

In this story, the present time is spent at the hospital bed of the main character's mother. While Cassandra Fitzpatrick is waiting for her mother to die - and for the arrival of a mysterious person who I was wondering about until quite shortly before her identity was revealed -, she mentally goes through her life from childhood to the point at which the reader finds her now.
It is an unconventional childhood, but a happy one.
Then something happens to Cassandra which radically changes her life, both inwards and outwards.

As she grows up, for a while it seems her future is rather clearly mapped out, until once again something happens that changes not only her life, but that of the entire household her mother has set up.
When she decides what to do after school, that decision turns out not to be final, either, but eventually, Cassandra finds her niche in life - it is a life as unconventional as that of her mother, although of a very different kind.

Just like with "Dead Ernest", I am not going to quote anything directly from the book; you should read it for yourself, and I think you won't be disappointed.

Frances, you can be as proud of this one as of your first book, and I do hope to read more from you soon!
Posted by Librarian at 08:13