Just like the guest post about growing orchids, today's guest post was, once again, not written my my Mum or anyone else I know personally. Instead, the author offered it to me by email. Well, strictly speaking, she offered any post related to travelling, either about a particular destination or some other aspect of travelling. Since I was given the choice, I asked her to write about Brimham Rocks, a place not too far from Ripon, where (as you will know if you have been reading my blog for a while) some of my Yorkshire family live and I spend some time every year.
In 2011, my sister-in-law took me to Brimham Rocks for a very nice day out. We had an aunt and uncle with us and enjoyed walking and climbing about (not too much climbing, though; we left that to those better equipped for it).
To my amazement, I found that I never wrote about that beautiful place on my blog, and therefore, this guest post offers some of the information I could have given you last year.

First, here is a short bio of the author:
(Note: I was asked to include the link to the vacation rentals website. I am not getting any payment for this, and the website in itself is not making any money by you clicking on the link and having a look round.)

Angela Harpert is an avid traveler and adventurer by nature. She quickly falls in love with new places, new cultures and undiscovered "treasuries", constantly finding inspiration and fascination behind every corner. For more or useful tips on your perfect vaction please vitit http://www.vacation-rentals.com.

Unlike the art of rock balancing, which is something absolutely amazing (look it up, I dare you) balancing rocks are a natural occurrence. The Brimham rocks are one such formation of strange rocks you'd expect to tip over at any moment by just looking at them. Now I have occasionally seen similar formations during my travels, though nothing so amazing and precariously balanced as the idol rock among this formation.

For those of you not familiar with where these are, they are located (as the name suggests) in Brimham, not far from the Brimham moor. If you have a vivid imagination you can see all sorts of amazing shapes in the rocks, from animals to human beings. Kids and adults love climbing all over them and even though this may look dangerous in reality they are firmly connected since these are rocks usually carved by the elements which only look this way. You might think of the rock as a flower with a stem, where the lower part of the Idol Rock for example is the “stem”. This is not uncommon among people who have seen these rocks all over the world. The area is absolutely gorgeous and serene thanks to its relative distance from the local civilized areas. There is a gift shop and a visiting centre on site, however they are closed throughout the week and only open during the weekends. 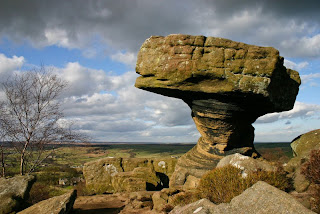 Geologically speaking they are formed in various ways since they may vary with size and structure. The Brimham rocks are what we call pedestal rocks and for many years it was apparently believed the reason for these formations was simple wind abrasion. As more time passed however scientists have finally concluded there must have been chemical weathering at the base of each of these rocks to produce such an effect. Sometimes these rocks are also referenced to as hoodoos. The term is geological, however the name probably originated in North America where they were compared to totems because of their unique shapes. Whatever the case people's imaginations have been running wild here for centuries. These rocks were often said to have been connected to a number of magnificent ideas such as druid worship, connection to the Devil himself and even the English soothsayer Mother Shipton among all things.

What shaped the Brimham rocks however is believed to have been the result of sand blasting the bottom of the rock in the case of the Idol Rock and with the others it was the continuous act of freezing and thawing which resulted in the curious shapes we see today.

If you haven't visited this place before this is something you shouldn’t miss if you're in the area or in Yorkshire in general. It is a nice, serene place where you'll be able to enjoy nature's touch everywhere around you. The sights are beautiful and the air is clean and lovely, so this is a perfect place for a nice picnic or some time just contemplating and relaxing.

When I visited this beautiful place, I took many pictures. You can see the great view I had from there, as well as some of the unusually shaped rocks, by clicking on this picture

and then "next" in the top right corner above the picture. I hope you liked this short excursion into the great wide open!
Posted by Librarian at 08:16