Last month, quite similar to Omar's email, I had a message from another author asking whether I felt like reviewing his book. This time, though, it was a novel: "The Cuckoos of Batch Magna", and the author is Peter Maughan. 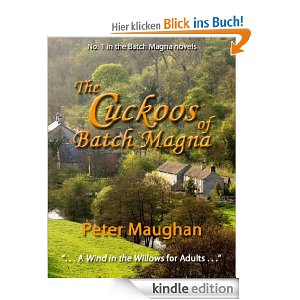 You won't be at all surprised to hear that my answer was yes, and not long afterwards, I had "Cuckoos" on my kindle and was ready to start reading. Before I did that, though, I checked out Peter's website. There, I learned that a lot of what I was to expect in the book was based on personal experience: In the 1970s, Peter was a houseboat dweller on a converted sailing barge, part of a small colony of houseboats on a river in Kent.
You can just tell when someone writes about things they really know about, can't you!
Yes, there are differences: while Peter's houseboat colony was in Kent, his book is set in Batch Magna, a village on the border between England and Wales. While his houseboat was a sailing barge, the ones in the book are paddle steamers. But everything else, I trust, is quite near to what it will have been in real life:

A small, close-knit community living on boats next to a village; sometimes in conflict with the village people, but most of the time co-existing peacefully. The river, and how it changes with the times of day and night and with the seasons throughout the year. Life on the boats, different from boat to boat (some are family homes, another one has just one single occupant and his dog, while yet another one is home to an elderly couple) and yet having in common an undefinable quality of leisure and freedom that some of the people in the village do not understand.

The plot is quickly told: The old squire (who owns pretty much everything in sight, including the houseboats) dies, and title and estate go to a distant relative, Humphrey (or Humph, as he wishes to be called), a short-order cook from the Bronx. The new baronet arrives in Batch Magna with just one purpose: to do what is necessary to convert the estate (river and all) into a holiday experience of rural England for US millionaires. That conversion of course means eviction for the houseboat dwellers, something not everybody in the village is unhappy about.

But knowing that "Cuckoos" is the first of a series of books about Batch Magna, it is clear from the start that Humphey's plan won't come about. While this knowledge does take away a little of the tension, there is still plenty to keep the reader in its grip: the characters, all lovingly portrayed with their strengths and faults; the various relationships between them and how they develop; the landscape, the boats, the manor house and the village. It's all there to keep you interested and make you want to know more, and it is easy to envision this almost magic world of the not-so-distant past because of Peter's descriptive, sometimes outright poetic, language.

Take this, for example:

"The mist had rolled up to Batch Magna's High Street, and as far as the castle above the river, the last grey wisps of it drifting among its ruined stone like cannon smoke, like the ghost of old battles. The trees on the lower slopes of the hills were ragged with it, and it was as if snow had fallen elsewhere, the hawthorn of the valley piled with blossom. A green and white scented world that seemed to have bloomed overnight."

"Lucy was standing at the rail of the Belle, holding her face up to the moon as if to the sun, its light falling like dust in the air. The river was sluggish with light, stirred with it midstream to a thick inky silver, and black with shadows under the trees."

Otters have a part in the book that is not huge, but highly symbolic - although you can of course simply read the book and enjoy it, it doesn't need interpreting to be a good, entertaining and sometimes rather touching read.

It is good to know that the end of this story is not the end of Batch Magna, and that we will have a chance to meet the houseboat dwellers again.

Again, similar to what I did with my review of Omar's book, I invited the author to have their say here as well, and this is what Peter wrote:

It surely must be unique among book blogs, even in a publishing and literary world turned upside down, for there to be a spot featuring a review of a review. Meike has turned the knife (or gun or blunt instrument, perhaps, in the case of a crime novelist) round and handed it, handle first, to the author. Your turn now.
It is brave of her, and speaks I think of her integrity as a reviewer.
Reviews of course, as far as the author under review is concerned, are either black or white, good or bad (leaving aside something called ‘constructive criticism’, behind which less altruistic motives sometimes lurks, or which, in incompetent or clumsy hands, the result can be not so much constructive as destructive, or at best sow doubt in ground that isn’t yet ready for it).
The bad, to put it baldly, often says what  he or she knows in their heart to be true, but wants of course to be told otherwise. The good says what he or  she waits more anxiously, more ardently, than the worlds of any lover to hear, while already knowing them in their heart. There are other versions of the truth of course when it comes to the subjective nature of writing, but those I think are the walls between which all else, weeds and flowers, grows.
I should say here that I am writing this (at Meike’s invitation) as a novelist whose book, The Cuckoos of Batch Magna, is the subject of one of Meike’s reviews. A review I have yet to read (for the present, the handle of the knife is still in Meike’s hand).
But having read other reviews on her blog (the reason I approached her with a review request in the first place) I know that the result will be an honest,  intelligent and informed one, and that it will combine insight and imagination. No author could - or should - ask for more.
Peter Maughan
Posted by Librarian at 07:54