"Die stille Kammer" by Jenny Blackhurst was originally written in English (title: "How I Lost You", which has nothing in common with what the German publisher made of it - "Die stille Kammer" means "The Silent Chamber"), but the copy I was lent was translated into German. It was good enough to convey the story, but not exactly brilliant (the translation, I mean). 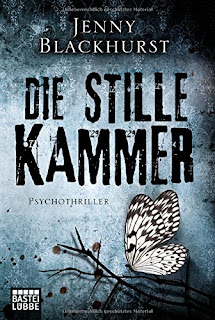 The heroine is a young woman who has just been released from a forensic psychiatric unit, where she spent a four-year-sentence for having murdered her 3 month old baby in a fit of postnatal depression. Upon her release, she is given a new identity and moves to a place where nobody knows her. She still has no memory whatsoever of the terrible act she was told of having committed, and when strange things start heppening and clues appear pointing to the possibility of her son being alive, she jumps at the chance of solving the mystery that surrounds her own recent past.

She gets help in the shape of her best friend, a fellow inmate from the psychiatric ward, and a journalist. In the course of events, many people she thought she can rely on are revealed as not being what they seemed.

Chapters jump back and forth between the heroine's present and events that occured 20 years ago. The connection between the two threads of the plot remains unclear until about two thirds into the book, and the actual solution of the mystery is not easy to guess, although the answer to the Big Question - did she kill  her baby or not - is rather foreseeable.

Altogether, it was not a waste of time, but certainly not a "must read", either. Some of the things the (main) characters do and say are hardly plausible, but that's probably just me; a glance at the book's reviews on Amazon shows that most readers loved it.

This is the author's first published novel. It is highly unlikely that she will become a favourite of mine, but she'll probably improve with practise.
More about Jenny Blackhurst can be found here.
Posted by Librarian at 08:20