The only fault I could find with Neil Gaiman's “The Ocean at the End of the Lane” was that it was rather short, and took me only 3 or 4 evenings to complete. 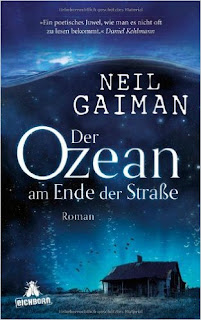 If you have read Neil Gaiman before, you know to expect the unexpected. There is magic and there are gods and supernatural beings mixed with everyday reality, making his stories a tightly woven fabric where the reader comes to see nearly anything that happens, even the weirdest and strangest things, as normal or natural.

Fantasy books are not my preferred genre (not anymore - I was heavily into it from when I was about 13 until maybe 18); apart from the Harry Potter series (and Narnia, of course!), there are few I really like. Neil Gaiman definitely is among those few.

The main character tells the story from his perspective. He is a middle-aged man when the book starts and ends, but the actual events takes place when he is seven years old. Most of the time, what he thinks and how he perceives his environment appears rather credible for that age. What I find hard to believe, though, is something that happens early on in the book: His parents' tenant commits suicide, and the little boy understands what the pipe leading from the  exhaust into the car means when he arrives at the scene. Would you have known the meaning of such a set-up when you were seven? Not me, that's for sure.

Further down the road from where the boy (who remains nameless throughout the book) lives is a farm. There, a trio of grandmother, mother and daughter live: the Hempstocks. 11-year-old Lettie Hempstock makes friends with the boy, and it is with and through her that he embarks on an adventure that is beautiful and terrible at the same time. When the children emerge at the other end of the story, nothing will ever be the same again.

I really wanted to know what would happen next, and was not disappointed. There were danger and friendship, spooky and funny moments. I'm not a fan of horror stories, so I won't read all of Neil Gaiman's books, but I truly liked this one and I also enjoyed "American Gods" some years ago. Had "The Ocean" been available when I was a child, I think I would have liked it a lot, too.

[The copy I was given to read was the German translation. A very good one, this time, not like "Die stille Kammer".]
Posted by Librarian at 16:05