Without really wanting to interrupt my Yorkshire Holiday posts (especially not mid-day), I did feel I should post my review of the book I completed last before I completely forget what I have read. 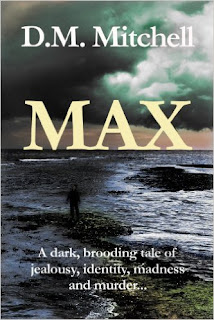 "Max" by D.M. Mitchell is a thriller that has all the ingredients you'd expect: A set of characters well distinguished of each other, a secret in the past that links at least two of them closer than they would like to, several crimes that may or may have not been committed by one of the main characters, and a remote and dramatic setting for some of the scenes.

Philip narrates the story - or, rather, his side of it - from a first person singular perspective. His childhood was a very ordinary working class one during the 1960s in a small mining town in Yorkshire.
When he is 10 years old, a single mother and her son move to the neighbourhood, and nothing is ever going to be the same again: Connie, the mother, is different from any other women the boy has known so far; she dresses well, laughs a lot, loves music and life, in spite of it not having been all that good to her. Her son Max, whom she adores, is the opposite - often brooding, sometimes aggressive to the point of being violent, and not willing to conform to any of the rules of school and community life the other boys accept without questioning.

Philip is fascinated with Max, and the unlikely pair become something that from the outside looks like best friends. But as they grow up and Max reveals how he really feels about the other boy, things become decidedly darker.

The book switches from one character to the other, and often between past and present, with each chapter. How much of what the reader is told has really happened, and how much has only ever taken place in the imagination of the narrator? Have people in Max' way been killed or were their deaths the accidents or suicides they appeared to be at the time? Is the narrator now in danger of not only losing his freedom forever, but even his own life?

The switching between characters, times and places certainly kept suspense alive until the very end of the book. I found it well written with only a few errors that could have been discovered with thorough proof-reading, but it was free on Amazon's kindle shop - I can't complain about its overall quality and really did enjoy it.

The author was completely unknown to me, but should I come across more of his work, I know it will be worth my time. A biography and other information about D.M. Mitchell can be found here.
Posted by Librarian at 18:20