Precisely one year ago, on January 1st 2015, I posted here about a family meal which, for a change, was hosted by me and not my parents. Easy to do, too, as I only invited the "inner circle" - meaning my parents and my sister, unlike the meals at Mum and Dad's place where there are rarely less than twice as many of family and close friends gathering.

The meal was not held today, though. It was the Monday after Christmas, the 28th. While I hardly ever cook for just myself, I do enjoy cooking and baking when I have a reason to do so, i.e. when I know the food will be shared with and appreciated by others.

This certainly was the case on Monday, when the menue was as follows:

I did cheat on the sauce (that was a ready-made one) and the dessert (bought at Aldi's), but I made the Yorkshire puds and everything else myself. And it really was good, with exactly one portion (the plate you can see in the picture) left over. That made a nice lunch for me on Tuesday. 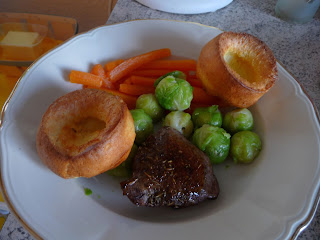 Last time I made Yorkshire puds, there were more left. Not because they weren't as good then - they were just as good as they look here, both times. But this time, I was a little more clever and did not offer roast spuds with them, as they are so filling without the additional carbs from the Yorkshire puds.

It was a nice few hours spent with my family, and my Dad was so sweet - he brought me this bunch of yellow freesia! Freesia always remind me of spring, since they were the flowers (only white ones, not yellow ones) I wore on my little black taffeta jacket for my Confirmation in 1982, when I was 14 years old. 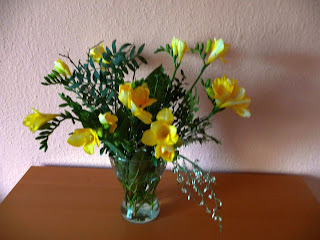 Spring is still a long time off, we haven't even had snow yet, but it will be there eventually, I promise!
Posted by Librarian at 19:04