After I gave you quite a lot of pictures and (historic and other) detail about my home region, I have prepared something special for you for my last post of 2015: 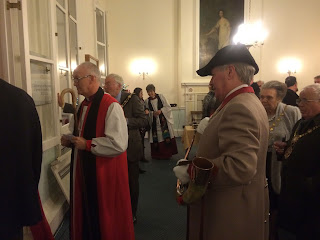 Ripon Town Hall Chambers just before midnight. The Bishop is about to step out onto the balcony to address the crowd with George to follow. 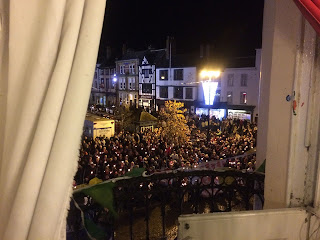 A view of the crowd on the square looking down from the Town Hall balcony.

No, I have not travelled to Ripon since you last saw me walking along the Neckar. But after I told you about Ripon's Hornblower tradition a few times already (here for the first time, and again in 2014 and this year, I thought it fitting to wish you all a Happy New Year "from Ripon", so to speak.
After I had posted about the new Hornblower this year, I got in touch with George Pickles, the former Hornblower, via his website. We began corresponding, and I had so many questions that the idea of posting an interview with him came up.
He sent me the pictures you can see on this post, and patiently answered my questions. Before that, he even sent me a CD with "The Wakeman's Song" and a short presentation of the history of the Hornblower Tradition. Also, I received a very pretty Christmas card from George and Lilian. I feel privileged to know such kind and friendly people!

1. Do you remember how and when you first heard of Ripon's Hornblower tradition?

As you may know I retired to Ripon 14 years ago with Lilian my wife, from the industrial part of Yorkshire after almost 50 years in the Engineering industry, looking for a nice Rural area for in which to enjoy our well earned retirement. Up to then we had only heard slight rumours or brief references about some chap blowing a horn on the square each evening in Ripon.

2. Did you think back then "I want to do that" - or would you have never expected to be the Hornblower for so many years?
We had not lived in Ripon long before we realised that there was more to the ritual than we had first thought. We started visiting the evening ceremony on a regular basis and became more and more interested in the history and the legend surrounding the daily ceremony and began to look further into it. We were also very impressed by the dedication of the Hornblower of the day, and always felt that it would be such a privilege to hold such a position and to be trusted with such a responsibility. When family or friends came to visit we always took them to see the Hornblower.

3. How does one actually become Hornblower in Ripon? Do people apply for the job, or are they chosen by a committee?
We had only lived in Ripon for about 18 months when the Hornblower of the day gave notice he was standing down from the role and going to live in France. The City Council, the employers of the Hornblower, advertised the position, but no one applied for the job. Two former deputies, the City Mace bearer and a former Mayor were keeping the ceremony going, but none were in a position or capable of taking on the commitment fully. The Role of the Hornblower and the ceremony was in danger of dying.
After talking it over with Lilian, I requested an appointment with the Mayor. I offered to take on the role until they found a more suitable candidate. The Mayor then arranged for me to be interviewed by a panel which consisted of the Mayor, a former Mayor, two City councillors and a legal representative from the District Council headquarters.
After the meeting, and although I had never blown a horn, or indeed any wind instruments, plus they didn't have a uniform to fit me, and I had only scant knowledge of the history and general proceedings, they gave me the job. I think it was out of desperation, and in any event there was no one else, but the continuity of the ceremony in some form was at least assured.
I spent every spare moment of my time for the following weeks, driving out into the country miles from where I could be heard, sitting in my car and practicing blowing the horn until I could produce an acceptable note. I conducted the ceremony in my own black overcoat until the uniform coat arrived from the tailors. I studied and researched the history and the legend until I had a very good knowledge, from which I devised an oral presentation based on what I had learned plus some light hearted humour. My presentation proved to be a very popular success and before long I was receiving invitations from far and wide as a guest speaker, plus radio and TV appearances. All moneys raised by me as a result were given to local charities.

4. Did you ever think "I really don't want to do this tonight" and would have liked to stay home instead?
Shortly after my appointment, I was approached by a USA serviceman called Eugene Boarman who was working at a nearby military base. He expressed a desire to be my Deputy. I took an immediate liking to him and asked the Mayor and Council to officially appoint him to that role, which they did. I spent a great deal of time schooling him. Eugene became a close friend and colleague and worked with me for about six years before he was posted back to the USA. With him at my side, I was able to have the occasional holiday, and he would cover for me if I had evening speaking engagements or other ceremonial commitments. The Hornblower role is a serious commitment, it disrupts your  social life, and home life to a certain extent, and without an understanding wife, it would not be possible to fulfil the duties over a long period of time. I am very fortunate to have such a lady as a wife.
There are times, such as the depth of winter when there is thick snow, and frost and the fire in the hearth is glowing nicely, when you feel that it would be nice not to have to go out and conduct the ceremony. But, once showered, shaved and dressed in the uniform, pride and dedication to duty soon overcomes the negatives.
Whatever the weather, time of year, or other conditions, there is always some visitors to see the ceremony. The smallest number I have ever performed in front of is about eight, and the largest crowd would be about three hundred.

5. You must have countless stories to tell about what being a Hornblower involves. Any particular, most treasured memory?
There have been so many memorable experiences during my time as Hornblower, the wonderful reception from young children when I went to so many schools to talk, the old peoples homes I visited each year at Christmas, and the raising of funds for those less fortunate. So may happy memories.

As you may know I decided that the modest monies I was paid by the Council, would be spent on a token of appreciation to give to visitors. With this in mind, I designed and had produced the Hornblower Lucky Wooden Penny. Little did I know how popular these would become, with people travelling long distances to be presented with one, and the stories of good fortune they had brought to so many people.

On one occasion, after I had carried out  the ceremony and was talking informally to the visitors and giving out some 'Pennies', I gave one to a young lady. As soon as the 'penny' was in her hand the young man with her went down on his knees, produced a ring and proposed. This incident reached the media, and thereafter so many young men brought their ladies to the square, pre arranged with me, and when the 'Penny' was given, the engagement process took place. This happened so many times.
Another occasion, a couple travelled 200 miles to ask for a 'Lucky Penny', because they were having trouble adopting a child. They returned a year later to introduce me to their lovely 3 year old son they had just adopted.
There are just too many stories to tell by email.

6. Your advice to the current Hornblower(s) ?
As you know, the duties of the Hornblower are now being carried out by a team of three or four men on a job share rota basis, so I will be recorded as the last person to singularly hold the post. My advice to those who share the duties is to remember when on duty, you are representative of the City of Ripon and the custodian of the longest ongoing daily ceremony in the world. Be polite, be dressed to a standard befitting the position and conduct yourself with pride and dignity.

Thank you, George! I am sure my readers will appreciate your answers as much as I did. By the way, I still have my Lucky Wooden Penny, the one you gave me in 2012. And that year brought me my current job, which I love and intend to stick to until retirement :-)
Posted by Librarian at 08:33