This was the second time I read something by Carole Matthews. Re-reading my review for "The Only Way Is Up" confirmed my overall feeling about the "Cake Shop": A nice, harmless read, but (sorry!) nothing I'd spend my money on or would actively go looking for.

The book was a hand-me-down from my mother-in-law, and I can see why she enjoyed it. Nothing challenging, a not-too-big set of clearly defined characters and a plot easy to follow. 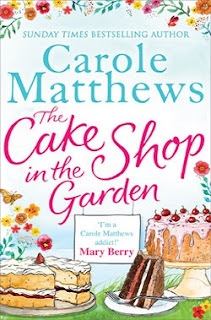 What is it about?
Fay lives in a beautiful if somewhat run-down house by the canal, caring for her elderly mother and making ends meet by having established a cake shop and café in her garden. Her father died years ago and her younger sister lives in New York and never comes home. Her days are filled with baking, working the shop and café (constantly interrupted by her very demanding mother upstairs) and spending quiet evenings home, sometimes joined by Anthony, her partner of 10 years who comes across as a rather stiff, middle-aged bore.

It looks as if Fay's life is firmly set in these routines for the foreseeable future. But then things begin to happen that make sure nothing is going to be the same ever again:

A stranger moors his narrowboat on the canal behind the house and asks for temporary work. The health of Fay's mother takes a turn for the worse. Her sister comes visiting. Anthony has a new member joining his handbell-ringing team. Fay finds out something about herself she never suspected, and her whole life as she knew it up to then comes crashing and tumbling around her.
What will she do - and who with? Where does her loyal if rough employee at the cake shop, a Latvian girl named Lija, come into play?

The overall plot was foreseeable. From the first moment a certain character is introduced, it is clear that this is who Fay will end up with. But some things happen that offer a little suspense here and there, enough to keep me reading on so that I could find out what happened next.

Although every character was fleshed out with enough detail, I felt rather indifferent about them - actually, I mainly wanted to know whether I was right in assuming where the story was heading (I was).

All in all, a cosy, light read with enough drama to make it not boring, but not so much so as to lose any sleep.
Posted by Librarian at 19:06