Originally published in 1887, this free ebook from Amazon's Kindle store does what all ranking lists are prone to do: It gives a biased view on what was considered "great" at a certain time and from a certain perspective. 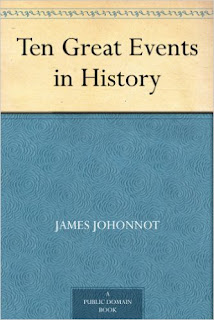 For the author, the ten great events were
- Defense of Freedom By Greek Valor
- Crusades and the Crusaders
- Defense of Freedom in Alpine Passes
- Bruce and Bannockburn
- Columbus and the New World
- Defence of Freedom On Dutch Dikes
- The Invincible Armada
- Freedom’s Voyage to America
- Plassey; and How An Empire Was Won
- Lexington and Bunker Hill

An entire chapter is dedicated to each of these events. The historical impact of each of these can certainly be valued differently, depending on whose "side" the reader is on and at what point in time the event is considered. For instance, few people would doubt the impact Columbus' voyages had on the shape of the world as we know it today. But has the defense of freedom in Alpine passes made much difference to, say, someone living outside of Europe today?
In a collection of ten great events in history, I suppose nowadays most people would include the trigger events for the two World Wars. Maybe the Moon landing, maybe the invention of the car and the computer, and - for us bloggers - the internet.

But, unsurprisingly, the author was very much a child of his time, and therefore the list is the one above. He states the criteria for his choice in the preface: "The great events in history are those where, upon special occasions, a man or a people have made a stand against tyranny, and have preserved or advanced freedom for the people."

Some chapters I read with more pleasure and interest than others. The ones about Wilhelm Tell ("Alpine Passes"), Columbus, and Freedom's Voyage to America were my favourites. Others I must admit I sort of quick-scanned in parts, especially when there were pages and pages of lengthy ballads and poems, quoted in full.

James Johonnot lived from 1823 to 1888. Wikipedia calls him a New York state educator. He wrote numerous books both for and about school and teaching.
Posted by Librarian at 07:55