What a strange title: "Penny for the Guy Mr. Olivier"! I had no idea what to make of this, but the sub-headline "A coming-of-age novel" caught my interest. 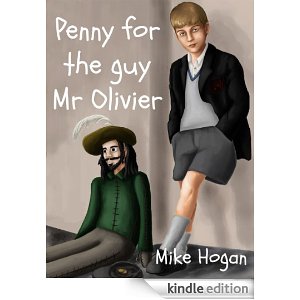 Mike Hogan puts the reader into the shoes of Mikey Cleary, a 12-year-old boy living in London. The year is 1963, many of the working-class community being originally Irish, with a sprinkle of Pakistani and other families in between.


Streetwise Mikey has learned that everything in life can be handled by bending the rules, sometimes breaking them, and by outsmarting "the system" -  those in power and authority - be it his teachers or members of the police force.


We follow him through various endeavours and adventures while he pursues his main goal: Getting enough money so that he can buy a bike. Sometimes he gets a bit sidetracked by making friends in high places (Laurence Olivier and Peter O'Toole, for instance; hence the book's title), trying to find out why his Dad never talks about the War, breaking and entering on behalf of the priests of his local church, working paper rounds and at other jobs, skipping school, saving the life of an elderly neighbour and worrying about his sexuality because woman's breasts leave him cold.


The thread linking all this events happening in the space of a few months is the Old Vic, a theatre in London where Mikey happens to rub shoulders with many a famous person from the world of drama.


A production of "Hamlet" is in the making, and everything comes together at the dress rehearsal for friends and families before the opening night.


For a time, I wasn't too happy about the way Mikey and nearly everybody else in the book approach life. But after a while, I began to understand, and to care. I really liked the way the author brings it all together at the end, and the message for Mikey (= for the reader): "...it was the bloody beauty of it that sent us all wild; the bloody, shining, shivering beauty of it. It was the love and pity of it. And the hate and the forgiveness, and the humanity, that was it. And that's what it was about [...]. Nothing else."


A lot of the language is Irish and/or Cockney slang. I didn't have trouble understanding the words in context, but for some, the glossary at the end of the book could come in useful. Interestingly enough, many of the terms I'd heard from Steve, whose Yorkshire family are of Irish descent.

I had not heard of the author before and went to check his website, where I found that the book has been renamed to "Hamlet & Me" and received a different cover.