"Sunshine over Wildflower Cottage" was my third book by Milly Johnson, and just as I enjoyed the other two, I really liked this one.

The author is from Barnsley, the area where my late husband was from. The locations in her books do not always exist for real, but they do have a Yorkshire "feel" about them, and this book was no exception. 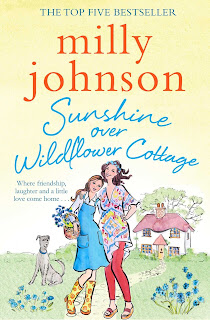 My mother-in-law gave me a pile of books when we arrived in Ripon, and I started to read almost immediately - hoping I'd finish at least one so that I would not have to try and fit it into my suitcase for the trip back home.

At first glance, you'd be forgiven to dismiss it as typical chick lit. Well, it is - and it isn't. There is a lot going on, and what happens to the characters is credible and well plotted. Also, the book touches on some rather difficult issues, such as domestic violence, adoption, people with mental or physical disabilities, cruelty to animals and more.

A young woman arrives at an animal sanctuary to work at their office - presumably to gain work experience, but the reader soon learns that she has a hidden agenda. What that agenda is, though, is not easy to guess, and is fully revealed only in the last quarter of the book.

The others who live and work at the sanctuary have secrets of their own, and so do the surrounding characters: the young woman's mother and her friends, whose life stories are all part of the book, as well as the rich landowning family on whose estate the sanctuary is. Of course, all comes to light eventually, and Good wins over Evil in the end.
From the first mention of the two main male and female figures, it is clear that they will get together in the end - no surprise there.
But along the way, twists and turns I did not expect make the story really interesting, and I did care enough about the people for wanting to find out what was going to happen to them next.

Places, people and the animals at the sanctuary are described very well. Milly Johnson says that she really enjoyed writing this book, having had an interest in birds of prey for a long time. That pleasure shines through, I think; not once did it feel like she just wanted to get over with a certain scene.
There is humour and seriousness, warmth and cold reality, friendship and enmity, love and hate - just like real life.

No high-brow literature, but it does neither aim nor claim to be that. A good read that kept me well entertained throughout.
Posted by Librarian at 07:33