"Yorkshire Grit" is a set of three books by Margaret Muir, an author I knew nothing about until I found her blog here. 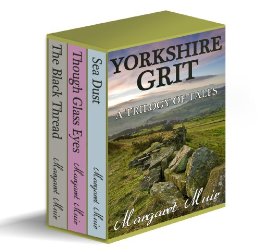 When I came across the set as a free ebook in Amazon's kindle store, the title alone made me click the download button instantly.
Last week, I finished reading the first book and am now at the early chapters of the second. (The set is not a series - each one is a book that stands completely on its own.) 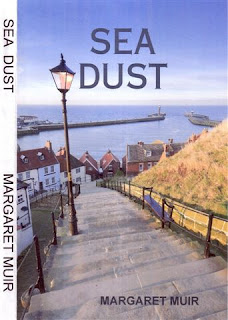 "Sea Dust", the first book, tells the story of a young woman who starts over under the most averse circumstances:


Her little daughter has just died, her husband is a violent drunkard, and her 12-year-old son is forced to take on a job instead of getting further education. With the help of a sailor, Emma barely manages to escape with her life and secretly boards a ship set for Australia, with nothing more than the rags of clothes she is wearing.


The voyage is dangerous and difficult, with Emma's life more than once threatened. But things take a turn for the better, and after several more ups and downs, some deaths at sea and unexpected developments, she arrives in Australia. Unsure of the direction her life will take, Emma reluctantly leaves the ship. What is she going to do to support herself? Where will she live - and who with?
Emma's story was touching, and I began to really care for her after the first few chapters. The ship, each character and what was involved in a long voyage at sea in the 19th century is described in detail - a lot of research work must have gone into it.


This is not one of those books where you can guess the outcome from page one; quite the contrary. Language and editing are good (I found only a few minor typos). There is only one tiny point of disappointment with this book for me: In spite of the book being part of a "Yorkshire" trilogy, only the first short part is actually set in Whitby (the harbour town in Yorkshire where Captain Cook came from). Most of the story takes place at sea, and the last part is set in Australia.


That small critique aside, this was a read I enjoyed a lot, and I am definitely going to leave a comment at the author's blog to let her know.
Posted by Librarian at 08:32