Did you know that today (Shrove Tuesday) is Pancake Day in many Commonwealth Countries? You probably did, especially if you live in one of said countries.

Well, I didn't know that until yesterday, when George Pickles, Ripon's former Hornblower, told me about it in an email.

Here is what he wrote, and I am adding a photo he sent with the email:


"So here in Ripon, tomorrow is Pancake day. I don't think this is an event celebrated in Germany?


I have attached a picture of a typical Shrove Tuesday Pancake race, setting off in relays from the front of the Cathedral, running up the length of Kirkgate. Each race would be arranged according to ages, or the representatives of various City groups. All very good fun. 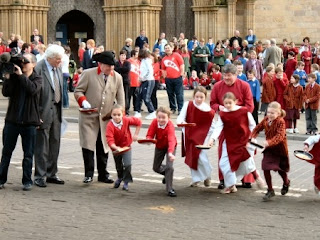 I would usually be involved with the Dean helping to set off the individual races. The Dean and I would then have a two man race at the end, to much cheering and laughing. The Hornblowing is not involved these days as the role is shared by a team."

George is right in thinking that this is not celebrated in Germany, at least not to my knowledge. But many places here have their own traditions for Shrove Tuesday. I will simply go to the office, as I usually do on Tuesdays, and work on whatever our customer sees fit to set before me.

If you wish to know more about Shrove Tuesday, the meaning of the word and some of the traditions around the world, click here for the wikipedia article.

Spring has really showed its face last weekend, and yesterday! It was so mild I did not need gloves or a scarf for the first time in months. Already the weekend before last, it felt very much like spring. O.K. and I were on a walk between his and the next village, and he took these pictures for me of hazel trees along the path: 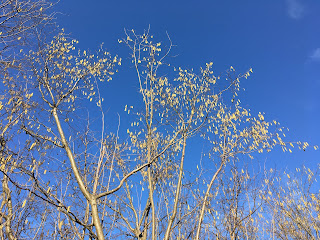 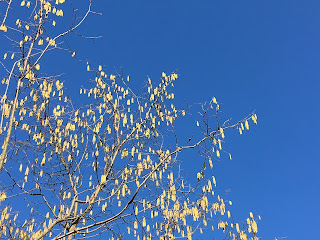 Don't they look beautiful against the blue sky? You should have heard the bees humming - a sound that was completely absent for months, too.
Posted by Librarian at 07:37