"Swimming Lessons" is Claire Fuller's second book, and also the second one I have read by her.


Similar to "Our Endless Numbered Days", it deals with a person's disappearing and the breaking up of a family. (You can click here for that review.) But that is where the similarities end; "Swimming Lessons" is completely a story in its own right. 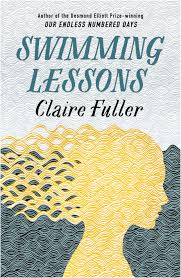 A wife and mother goes missing and is believed dead by most people. 12 years later, her aging husband believes he sees her in the street, rushes out to run after her and takes a fall. He ends up in hospital, and when he returns home, his two adult daughters come to stay with and look after him.


But of course there is much more to it than what this super-short summary lets on.


Why did Ingrid leave, and did she indeed commit suicide in the Sea? Was Gil imagining things when he saw her, or is she still alive?


How are the daughters - so very different from each other - coping with the situation?


The book is told from the perspectives of Ingrid and Flora, the younger daughter, in alternating chapters.


Ingrid's chapters are the letters she wrote to her husband in the days before her disappearance, never sending them to him but placing each letter in a different book dotted around the house.


Flora's part of the story is set in the present and involves the other characters - her father, sister and boyfriend as well as other people, not in the shape of letters.


I liked this approach but did not like Flora much.


I enjoyed Claire Fuller's good writing and the flawless editing, but disliked Gil, the father and husband, and could not relate to Ingrid, the mother and wife, and her actions.


There is one more similarity between this book and the first one, possibly only for me:


Just like with "Our Endless Numbered Days", I am not entirely sure what to make of the ending of "Swimming Lessons".


I can highly recommend this book, although it did not leave the same deep impression with me as the first one.


Claire Fuller is definitely an author I want to read more of.
Posted by Librarian at 09:22