From time to time, people ask – themselves or others – questions such as „If you could choose one person, past or present, to spend an evening with, who would it be?“


What did I know about Mark Twain? Not all that much, admittedly. I knew his real name (Samuel Langhorne Clemens) and that he began his writing career as a journalist. Of course I came across him first when I was a little girl – who has not read and enjoyed Tom Sawyer and Huckleberry Finn? Much later, I learned that he had written loads more, and had a rather quirky and intelligent sense of humour not appreciated by everybody.

When I was given my kindle about 5 years ago, I went on a downloading spree of free ebooks from Amazon, many of them classical works or by long-forgotten authors. There were several books by Mark Twain among them, and I have read and reviewed some of them on my blog; here, here and here.


This year, a friend gave me not one, not two, but THREE Mark Twain biographies for my birthday! One of them is his autobiography, I am saving that for last. The first one I finished weeks ago but got round to writing and posting my review only now. 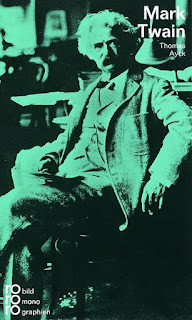 It is a slim paperpack, but crammed full of information about Mr. Clemens, his life and his work. The choice of photos and illustrations is good company for the words. The author does not put a halo above his subject’s head, but paints the picture of a man who had his strengths and weaknesses like everybody else.


I learned a lot of this book. For instance, I did not know that he was such a loving and faithful husband and devoted father, or that he was as good as bankrupt because he enthusiastically put all his money into dubious inventions. He worked hard and left quite a lot of his writing unpublished. Friendships were maintained for decades, but he could also be completely unforgiving when offended (real or imagined).

His family life was happy and close, even though his wife was sickly all her life. Their first child died at the age of 2. Three of four children and his wife died within a few years of each other; only one daughter survived him; Clara lived until 1962. He met these heavy blows with increasing sarcasm and irony, but wrote about them in his autobiography (which I have yet to read) in a very dignified manner.


For the last few years of his life, he hardly left his bed anymore, but worked on various writing projects until his death at the age of 74.


Wikipedia says: “Twain was born shortly after an appearance of Halley's Comet, and he predicted that he would "go out with it" as well; he died the day after the comet returned. He was lauded as the "greatest humorist this country has produced", and William Faulkner called him "the father of American literature".
Posted by Librarian at 18:12