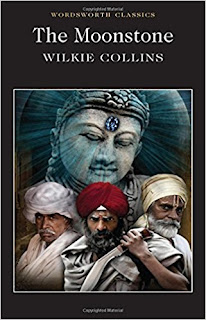 This mystery novel, originally published in 1869, was my train travel reading for several weeks - it is a lengthy book, but I captured my attention enough for me to want to find out what was going to happen.


The plot is simple enough: A big diamond, very important to a Hindu cult and its followers in India, is stolen by an English army officer when his regiment attacks the cult's temple during the time the British brought India under their control.


Many years later, the diamond (called "Moonstone" because it has an opaque core that shines like the moon) is given to family member for her 18th birthday. The young lady does not know of the violent history of the jewel, but soon realises nothing in her and her family's life will ever be the same again.


The moonstone is taken from her room, and the police are called. Strangely enough, the young lady, although very upset about the missing stone, refuses to cooperate with the police. Does she know who took it, or is she in some other way involved in the theft?


The number of suspects is small enough; the servants are quickly ruled out, but still there is no progress in the investigation, and the moonstone is not found.


A year or so later, the young lady's mother has died, a young servant has committed suicide, the lady is about to marry a man she does not really love, and the stone as well as its thief are still at large.


The young man who love s her returns from a trip to Europe and reopens the investigation with the help of a retired detective. Together with the oldest, most faithful and most trusted servant of the family, they solve the puzzle - not after many more dramatic events.


All this is presented as if written by the various persons involved, each from their own perspective. I most enjoyed the servant's account; he was my favourite character in the book. The others vary from humorous to dramatic, and some are really unnecessarily lengthy, but everything is within character, and leads to a rather surprising solution of the whole case.


Needless to say, the book ends well; the young lady and the man she loves are together, and the stone is restored to its rightful place.


The wikipedia entry says that the story "...is generally considered to be the first detective novel, and it established many of the ground rules of the modern detective novel." I had not heard of the author before, but his own entry on wikipedia is rather interesting. The picture is not mine - my free kindle version from Amazon has a very plain cover.