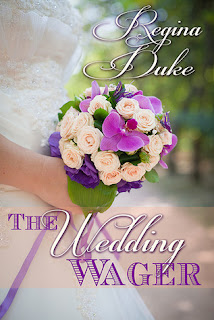 # 28: The Wedding Wager
by Regina Duke

Another light read that I enjoyed, mainly because after a while, I cared for the heroine:

Megan's parents are missionaries, working and living somewhere in South America. She has been fending for herself for many years, and is used to a frugal lifestyle. When she is on her way to Chicago where she is supposed not only to start a new job but also a new life, a car crash makes her not only end up in hospital for half a year but also means an end to her dreams of a new life; the job goes to someone else, Megan has no place to live, and to top it all, is saddled with huge medical bills she fears will make her be in debt for many years.

Kevin comes from a very rich but dysfunctional family. His parents live separate lives, and his father threatens to take away his mother's part of the fortune; there is only one condition that can make Kevin inherit the estate and secure the financial future of his mother and his two younger siblings: He has to be legally married before his 25th birthday.
With only a few weeks left until that day, and no prospective bride in sight, Kevin takes desperate measures to find a suitable woman by placing a job advert in the paper.

Megan responds to the advert without really knowing what she is getting herself into, and the stage is set...

The outcome is not difficult to guess, but of course there are obstacles to be overcome, last but not least by the feelings Megan and Kevin quickly develop for each other. As I said, a light, easy read, just right for those train trips to and from work. 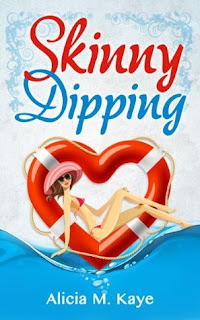 We're staying with nice and easy, only that this time the setting is not Chicago and rural Colorado, but London and the world of advertising: glitzy and glamorous on the surface, but a pool of sharks underneath.

Combine a hard-working expert in advertising who has a water phobia with a client who wants his swimming centres made more popular; a woman who has just been left by her long-term boyfriend because she works too much and a man who has lost the love of his life almost two years ago, and add to that a cast of secondary (but interesting) figures such as the parents, friends and colleagues of the heroine.

You get a mix that makes for an undemanding, relaxing read, which was just what I wanted. It was no surprise who got together with whom in the end - actually, it was clear from the very first moment both characters were introduced. But I suppose that is part of the charm of such "chick lit" novels; no nasty surprises lurking for the reader (only every now and then for the characters, to spice things up a bit).

The writing was not brilliant, but alright; proof-reading could have been better but was not so bad as to distract from the story.


Both these books were of course free on Amazon's kindle shop.
Posted by Librarian at 09:34