A Saturday To Remember

Of course, there is something to remember about every day. But the last Saturday of August, the 29th, was definitely special.

We met around lunch time at the house of friends who own several canoes. There were six of us, and we started out sitting in their courtyard, sharing a round of savoury snacks that had just come out of the oven, washed down with a glass of sparkling wine.

The men made sure the canoes were firmly strapped to the trailer. O.K. drove his car to the end point of our planned route, then joined us in the van so that we could all arrive at the start point together.

All six of us had been on canoes before, but we aren't experts - it was all just for fun, and to enjoy a few hours on the river. The river was the Rhine - of course we were not on the main waterway, but on what is called the Old Rhine, a system of naturally meandering streams running more or less parallel with the big river, a beautiful, overgrown, almost jungle-like area and very special habitat for a number of plants and animals.

Like most of Germany, that area has also been affected by several dry summers in a row, but thankfully, there is still enough water there to ensure the animals and plants are not in immediate danger. There are several points designated for canoes and other small water vessels to get on and off the water; motor boats are, as far as I know, not allowed.

The first part of our route was so overgrown in places that it was not easy to get through. At one time, a recently fallen tree blocked nearly the whole width of the stream, and we just about managed to squeeze past, one by one. The water is never very deep, you can almost always see the ground, and so many plants grow in the river bed that sometimes the boat was sliding across the tops of the plants as if we were on a meadow.

All our belongings were in water-proof containers in each boat, and I did not want to risk anything by fumbling about with the container to get my mobile phone out for photos. That is why I can only show you a few pictures, taken at the point where we had to get out of the canoes, carry them across land for a few steps and then get back on the water. We used this as our stopping point for snacks and drinks, and a good photo opportunity. 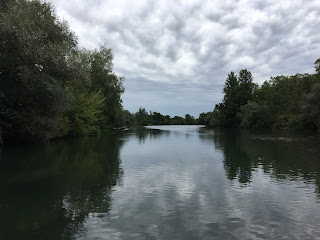 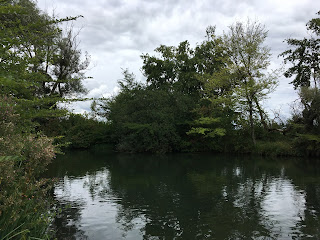 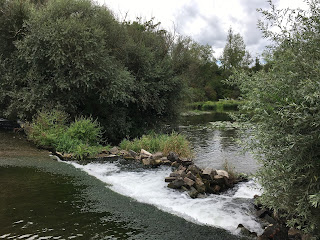 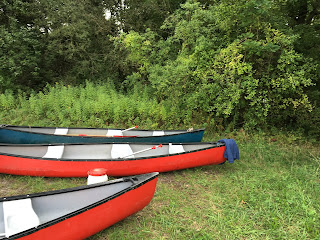 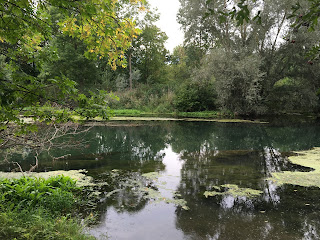 The last two pictures were taken at the end point. From there, it was about a 15 minute walk to O.K.'s car; we drove the owner of the canoes to where he had parked his van at the start point, so that he could drive back to where the others were waiting by the river, load the canoes on the trailer and drive home.

O.K. and I had just about enough time at home to have coffee, freshen up a bit and get changed. Then we were off to an outdoor restaurant in the fields between O.K.'s village and the next, where we were booked for dinner with his parents, his sister and her husband, to celebrate his mother's 80th birthday.

The food was nice, and although it was not exactly a hot day, it was warm enough to eat outside and sit there until after dark. Even the wasps took pity and did not bother us too much! O.K. and I walked both ways (the restaurant is about 3.5 km away from the village), and I also enjoyed that nightly walk back under the stars.

A Saturday to remember - I am sure you'll agree!